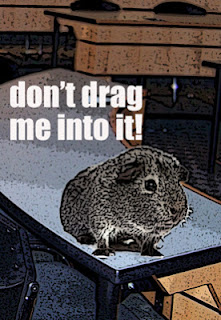 I gave a quiz in my Survey of Rodents yesterday. I show them a picture of a rodent, they identify it, and they answer one additional question about it. Most of the time, the follow-up question can tell a smart test-taker which rodent is the correct one before they even see the picture. (For example, why does this particular rodent live in Oscar the Grouch's trash can with him? Or, why does this rodent build dams?)

But Adamant Andrea is not a smart test-taker. She is not smart. I passed out the quizzes, returned to the front of the room, and realized that the quizzes hadn't reached the end of Andrea's row. They were still in a pile on her desk. She ignored them while she still had out her notes.

Pile of blank quizzes on her desk. Her notes are out in broad daylight.

I approached her and said quietly, "I can't let you take the quiz because your notes are out and the quiz is on your desk." She started to argue with me, so I decided to drop it, give the quiz, and deal with it afterwards. I didn't want to the whole class to watch a shitstorm.

I had decided to let it go. In most instances, it's very hard to prove a student cheated because it's my word against his or hers, and I simply didn't want to go through that mess. Plus, Adamant Andrea isn't doing so hot in the class anyways. Until, on her quiz, she wrote, "I wasn't cheating. I had my notes out to look up the name of the Black Dwarf Porcupine because I couldn't remember it. Plus, it's a blank test. There's no way I could cheat when you haven't shown us any of the pictures yet."

So I have the student admitting, in her own handwriting, to looking at her notes while there is a blank quiz on her desk. But she's so stupid that she didn't realize both that she WAS cheating, and she should have been cheating much smarter than she was. I'm still not going to pursue this. I think her stupidity will Darwin her out of the population soon enough without me accelerating the process with an academic sanction.