Raining on a Snowflake's Parade 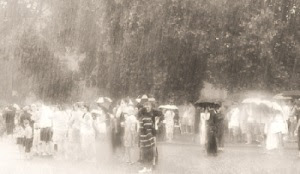 Today was the first time I've ever done something I never thought I'd do. I discouraged a student from going into the professoriate. Between her grades and the dismal job market, it was the only ethical thing to do.

Above Average Alice was a student in three of my classes. She was the classic CC success story: a mom dumped by her cheating husband who returned to school online and at night while working 40 hours a week in a local factory to support her kids. She graduated with her associate's degree, transferred to Local State U, and graduated from there as well.

Alice hates her factory job. She dreams of being a professor because she loves the English language, hopes to teach lit and writing to others, and wants to have time in her life to write. Her kids are grown and out of the house now, so she has some mobility. The problem with Alice is, well, she's just above average, AKA the B student.  She made B grades in all the classes she took with me. This was not due to her lack of intelligence but her insistence on not following rules for assignments. It even became a running joke between us because some of her other proffies would excuse her from departmental requirements since they liked her and she was so damned smart. I was one of the few in English who didn't, but apparently proffies in other fields had similar inclinations as she made it out with a 3.0 GPA and brought that up to 3.25 at State U.

Now Alice wants to go to grad school, straight into a PhD program. She's already been rejected by one of the top R-1s in our state, but that has not dissuaded her.  Her State U mentor had already told her not to take the proffie path. She didn't believe him and asked me for advice. I told her frankly, if she could get into a grad school, she should do it only because she loves English. I explained about the job market, the retirees' positions being replaced by adjuncts, the life of the freeway flier, and the insane number of PhDs looking for work. I told her she should become a technical writer since that's the only field I know of that has somewhat high demand that meets her requirements.

Alice didn't like my answer either and has now moved on to talking to her favorite counselor from her CC days.  I hope he has the good sense to give Alice the same answer. At least that way if she pursues the proffie path, she does so with fair warning from three fronts.