4 Years Ago On RYS: "NoteSuckers!" (A Student Post That Works!)


Trimester Tim from Tulsa Learns a Lesson About Note Suckers. 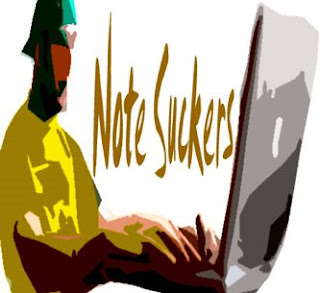 I am taking a math course right now that I knew would be hard, which is why I've been taking very good notes and copying them over after class. Since my handwriting sucks, and I like beautiful things, I've been typing them, and they are lovely. Fucking lovely, if I may.

My proffie has no problem with me emailing them out to people who need them for whatever reason, so I sent them to a few people who were missing notes before the first exam. Two were very grateful, two did not even respond to my email. Not even a fucking thank-you. Lame, I know. But whatever, I imagine it is a lot worse for the actual prof, who is a very accomplished mathematician.

So the other day I have my computer in class to correct my homework, and I get an email. Turns out one of the flunky flaky fucks whom I helped before the last test wants my notes, and is emailing me from his blackberry. Instead of, say, looking at the fucking board in front of him, which is known to often contain the information that should be in his notes. Keep in mind that that his email went something like "can...notes" and omitted any "please" or "thanks for the last set of notes." So I send them to him, because whatever, right? It costs me nothing to help this guy, and my revenge is the knowledge that he will suck at this subject no matter what happens to him.

In the email, I asked him to let me know about any typos, and he never responded. So I print out the notes and what do I find? It turns out that I really did a not-so-hot job on the transcription, and it had a number of typos that happened to make some statements mean the exact opposite of the truth. Because I am not retarded, I caught on to these and highlighted them to remove later. Him? I have no idea whether or not he was even able to read the shit, and I don't care. You pay for what you get.

On that note, the other of the two ungrateful assholes tried to buy homework from someone else in class; I'd raise a stink, but I know that he is probably going to fail no matter what.