I'm nowhere near retiring, and each semester I wonder if students can get worse. And you know what? They can! 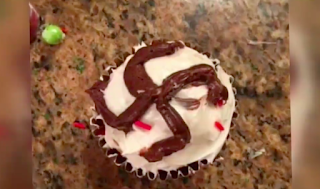 An Arizona mother said she hopes cruel birthday cupcakes given to her teenage daughter will become a “teachable moment” about the horrors of the Holocaust.

Deborah Muller, of Paradise Valley, said her daughter’s 14th birthday party this month included cupcakes that guests were allowed to frost. Two girls, who Muller said are friends of her daughter, decorated cupcakes with chocolate swastikas, even though the birthday girl is Jewish, according to KPNX-TV.

Muller said in a now-deleted Facebook post that the girls told her they did it to “be funny.” She said the teens all recently learned about the Holocaust in school, and were aware of the symbol’s meaning.

I love the detail that the students had been learning about the Holocaust, and my only response is: "Not much."