Yuri in Youngstown on Academic Cheating. 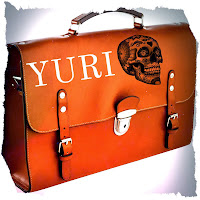 When I first became a Dean, I had no idea that a large part of every week would be spent on academic cheating cases. It was endless. It was discouraging. It changed the way I look at students forever.

In reviewing the past couple of relevant posts and comments, I remember a couple of English professors at my college who began to combat this in a way I found clever and unique.

It started with one loudmouthed kid who sat in my office one day
blaming his professor for a plagiarized paper. The argument was illogical but boldly proclaimed. He said, "My professor never even saw a rough draft." (Why? Because the kid skipped it.) "My professor gave me so much time out of class to work on it." (Why? Well, because this is college.) In the end, the kid just bought or copied a paper from an essay mill and turned it in. It popped up 90% plagiarized in our SafeAssign software, and then I was asked to be involved.

In the aftermath of that, two English professors made changes to their "out of class" essays, requiring that they be written - for the most part - in computer labs, much as they had run their final exams in the past. They had noted an increase in plagiarism and a complementary discrepancy in the quality of out of class and in class writing.

These profs, both of whom who are still here and thriving, began to book 2-4 classes in a row in our computer labs. Essay assignments were given ahead of time, and students could make notes and outlines and even do research. But they could not write.

Only in the labs were they allowed to work on their actual documents. At the end of lab time on a particular day the professors gathered the in-progress drafts (one on a flash or external drive; one by taking in emailed files.) Then the next day the students would continue with those same files.

I'm sure some kid figured out a way around the system, but all in all the incidences of plagiarism plummeted in those courses. The practice has now spread to some other faculty in English, and a great amount of worry that our students are doing their own work has dissipated.

I don't know if this kind of thing would work for everyone, of if there are some important pedagogical practices being skipped, but I do know it made for a lighter load for me.