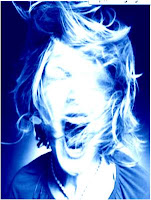 Here's the rest of the missive I knocked out in a tequila-induced haze last night. I was gonna save it for a few days from now, but today has SU-UCKED, so here ya go. I needs ta vent! Thus, my students, my classmates, and even some of my profs are gonna feel their ears burn as I get some shit off my chest.

Students:
Scholar Schuyler: The administration may refer to you as a "scholar athlete," but you won't excel at either if you spread yourself thin in both. Seriously, pick a career already. Either you go pro (...in women's softball....*snort!*....Wait, did I just laugh out loud? My bad!) or you buckle down and use the scholarship to continue to grow your brain and find a way to support yourself. I mean, wahoo for you! You can hit a ball! Figure out that that's NOT a life skill and move the fuck on! BTW - you are one of my few A students. You don't need to grow a brain, you just need to (a) avoid hard balls (1 concussion and you're working at Denny's) and (b) use your fooking brain! It's a good one, obviously. You have the smarts to figure out that a hobby is just that, a hobby. Oh, and they've invented a new personal grooming product - deodorant. I'll get you some, since you can't seem to find it at the store....

Premie Prissy: Yeah, those of us "not smart enough to get into med school" derisively call you a premie - since your whole world revolves around being PRE-med - as in, it's totally obvious you could give a rat's shit about learning anything, as long as you make enough A's to snag an interview. People like you piss those of us in *real* grad school off. No, we aren't jealous. We're just tired of having to regrade every fucking pre-lab because those 2 points we docked you for not knowing that bony fish have effing vertebrae (!?!) might mean you can't go be an "important" doctor. Blow me! If I ever go to a clinic and you walk in the room, I will sue them on principle for hiring your pretentious, bombastic, dumb ass in the first place! I am now ethically obligated to prevent you from ever matriculating at a licensed Medical Shool outside of Guam. And my hatred of you in particular (sweetheart, I heard you call me a "bitch" when I passed back the first pre-lab - and honey, I didn't screw that grade up, YOU did) will make your fall term with me in part 2 of this bio sequence a living hell. You wanna play in the academic big leagues? How about I give you a taste of the legit shit before you waste more money on another application. This is gonna be fun!!! For me, at least...

Classmates:
Music Major Marty: Yeah, yeah, yeah - you want to be a professional singer. You and about 3 million other people! And I kinda doubt that many of them are Mormon like you...so they don't have a problem doing things like feeling up the female lead 'cause their character's a total sleeze. It's an opera, for crissake! You have to *act* and *sing* - and you can't do either well enough to get paid to do it. I'm begging you, go find a career with a steady paycheck! Your 19 year old fiancee will appreaciate not having to work at the mall while she carries your fourteen LDS children...

Ginger-haired Ginny: Did you read the protocol we're following today? Cuz it's quite simple - we're dehydrating some tissue so we can make slides. Key word = dehydrating. But I'm pretty sure that pouring water over the tissue to "rinse it off" before the last step of a 10-hour-long 14-step process is an awesome, albeit untraditional, change in the protocol. I'd stop you but (a) you aren't in my lab group, so *my* tissues are fine, so I don't give a shite and (b) this is gonna be fun...once your labmates figure out who totally screwed the histology pooch, and subsequently their whole term project, you'll be lucky if they don't try to harvest tissue from you. I'm bringing popcorn and a soda to class tomorrow for the show :)

Profs:
Encyclopedic-brain Embry: I am in awe of the fact that you can pull obscure facts, terms, and topics out of your gigungo brain. But I also know there ain't no way in hell these students are going to (a) learn all of this themselves, or (b) not have a colletive aneurysm comes midterm. As one of your fleet of BioGeek TA's, I feel complicit in the destruction of the souls of 32 students (many of whom are other grad students, as well as the "good" premies). But you write the final grade, so have fun. I am SO chucking my guilt over to you. Ahhhhhh, that's better.

But, you know - and maybe this is the tequila talking - I've had a few epiphanies about people in the same 3 categories. *I* have actually learned from both my charges and my colleagues in the past couple of terms. I can literally feel a monkey flying out of my ass right now, and it's kinda fun, cause it's all furry and cute and it's making squeaky-toy noises, plus it's a freak of nature.... And the tequila's made me digress yet again. *setting up another shot*

Ok, I'm good. WOOT! And now to blow some minds with the pedagogy of life....
Students:
Sorority Sarah: I'd pegged you from the beginning as a total flake, but you have proven me wrong too many times in class for it to have been an accident that you knew your shit. Brava, bella! But, your grade concerns me - a solid C - it's a passing grade, but you have bitch-slapped me into realizing that you are capable of so much more. So I pull you in for a chat - tell you my concerns - and then hear you say, "Really? A C? I'm actually gonna pass a science course?!? That is awesome!" After I pick my jaw up off the floor (since I'm used to Bio-major super-keeners who stroke out over anything less than a super-high A), I tell you I think you can do better - your comments in class are insightful, informed from the readings, and you can deductively reason your way into the right answer with minimal guidance by me. Then the shoe drops. "But, I'm dyslexic - so I totally suck at test-taking! I'm super happy that I'm passing!" Without another word, I hand you the brochure for Disability Support Services and tell you to read it, and come see me again tomorrow. Next day: you come in, sit down and say, "Should I do this...this DSS...thing? Because I'm not really disabled." I tell you, "If you do this, you will become that student who's supper happy with a B or even an A. And if you don't like it after one term, just withdraw from the program. No harm, no foul." Next term, you took the 2nd-in-sequence course - and I could have used your first test as the key for grading all the tests. I ask you what's happened, since now you are rockin' a literal 100%. "No one ever really evaluated me for dyslexia - they just told me I was and that was it. I took a whole bunch of classes over the break in how to manage dyslexia in college - and it working! No one's ever helped me in school like this before. Thank you." And my heart grew 3 sizes that day...

Classmates:
Spiritual Sally: Generally, I'm a leftist commie pinko with a strong aversion for all things religious. But I've now known you for 2 years - and you've yet to ever cuss worse than to say "Oh my stars!" (which I think is totally cute - like I-wanna-pinch-your-cheeks cuteness level) I honestly thought you were on something - or a total poser. But then we talked - you know - that day we were studying at Coffee-I.V. and ended up chatting for 3 hours. You grew up in Africa, the child of Christian missionaries (egads, I cringed at that!) - but then, you shocked the hell out of me. Your folks don't say a word about their faith to anyone they meet - they educate the poor about HIV and malaria and prenatal nutrition, and they distribute medical and humanitarian supplies. Then you tell me you're a premie - pre-med - great, now I have to hate you on principle! But...what the hell??? You want a medical degree so you can go back to Senegal and provide medical care for the village you grew up near... And those assholes at the Med School have denied you entrance 3 times?!? Yes, your scores and GPA are minimal, but you....you volunteer night and day and really want to help people, and could care less about the money. Who the hell are your parents? Mother Theresa, Gandhi, and an effing unicorn?? And I just found out someone in my Advanced Anatomy course, who literally can't find a triceps to save his life, got accepted for next year....and you're still wait-listed. I have a taser - I could taze Triceps til he drools for you...This is so effing unfair. You want to be a healer and he wants to make 300K a year... I will pull every string I can reach this term to assure you become a physician.

Profs:
Disorganized Delia: I admit it - I did NOT like you when we first met. You're too skinny, you're too perky, you're THE most disorganized teacher I've ever had, and you're a walking physiology textbook - it's like you're God's Biology Cheerleader or something! But, I've had issues this term (I mean, duh, I don't call myself Bipolar Beth for shits and grins), and you have been more understanding and accomodating and encouraging than anyone I know, short of my therapist, my boyfriend, and my BFF. In all seriousness - thank you. (But, I gotta know - is it lithium or prozac? Cause your perma-grin can't be natural...)