Extra! Extra! Read All About It! Teachers at the Heart of Everything Wrong with America! 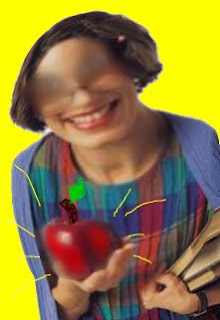 Waiting for Superman opens this week, a "documentary" that touts charter schools over public in the U.S. of A. while "proving" that teachers' unions are the culprit behind all that ails us.

The corporate machine that already has its grubby little hooks in every aspect of public education (thank you, George W. Bush) has now made a movie that panders to the Tea Partiers and the low-income urban dwellers alike. Waiting for Superman gives everyone a hall pass except for teachers and their unions.

A decade or more of blaming teachers capped by a glossy charter school/corporate machine PR piece is bad enough; having the President of the U.S. of A., the guy the teachers' unions endorsed in the last election, calling us out on The Today Show, is badder.

I heard it on NPR, our good President talking about sending what NPR called a "tough love message" to educators in the U.S. of A. NPR's paraphrase of President Obama's message on Today: "Their year in the classroom should be longer, and poorly performing teachers should get out."

Because, of course, the only variable that matters, the only contributing factor to the Downfall of Civilization as We Know It in the U.S. of A. is teachers.

And absolutely forget the teachers--that is, forget asking those who actually teach what needs to be done about, you know, education. In his interview on The Today Show, Obama said nothing about talking to teachers about what's going on in education in the U.S. of A. today.

Obama did talk a lot about managing teachers--and how else can one categorize the continuing rhetoric about getting rid of "bad" teachers?--and about a lot of other things:

• Pitting individual states against each other to compete for federal education bonus money. (What could possibly go wrong with that?)

• Blaming unions for being "resistant to change when things aren't working." (Things not working...like charter schools, which have been shown to increase segregation while showing little difference from public school performances?)

• So-called "dropout factories" with abysmal retention and graduation rates. (Where there's a chicken in every pot, an involved parent in every household, and a pony given for every birthday?)

Obama did talk about raising teacher pay, talked about valuing teachers, talked about wanting to provide teachers with what they need to succeed...but never once did he suggest talking to or with teachers about what's going on in public schools.

No one ever suggests talking to teachers about what's going on in public schools. Everyone does have a knack, however, for talking about teachers.

Think this has nothing to do with you, O Mighty R1 Researcher/Educator? Think again. Not only does all this bullshit about education reform affect you because you get many students who represent the end result of the public K-12 process (driving you to this very blog), but you are not at all immune to what dwells behind this talk.

If those among us who teach at four-year colleges and graduate degree-granting institutions think for one moment that the people behind education reform don't want to get their hooks into you--to dictate your curriculum, weed out the "bad" teachers from your department, make even more money off of your back--then you are not nearly as smart as your advanced degrees would indicate.

It's already happening at the CC level. Melinda Gates is just one of many corporatist-cum-philanthropists who's never taught but who knows just how to reform secondary education. The corporate machine wants a piece of the education pie, and that includes higher education. If the corporations--the ones who write the standardized tests, administer the standardized tests, dictate assessment, design curricula, and profit from all of that--have their way, they'll soon get their hooks into CCs, influencing legislation governing CCs to line their own pockets, in the name of reform.

They'll do this, apparently, with the blessing of the President of the U.S. of A. He's endorsing charter schools, perhaps widespread use of charter schools, further diverting funds from real public institutions into the pockets of people who profit, personally, from education. You won't be able to count on Obama at all. (And, yes, I voted for him, too.)

And you already know what legislators in the other party think of education, especially higher education. It's all right...as long as it's all right.

Politicians and bureaucrats, philanthropists and corporatists.

It's a hell of a conversation. What a shame we weren't invited.