Somehow Wicked Walter Must Be Behind This. 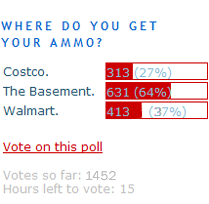 Legislators in Arizona, Florida and Texas are proposing a law that would allow community college and university instructors to arm themselves with concealed weapons.
Currently, only Utah allows concealed weapons on college campuses and they are banned in 24 other states, according to the National Conference of State Legislatures.
But in searching for solutions to gun violence on campuses, adding more guns to the equation is not the answer.
Admittedly, sitting in class, there are days where I have looked around and realized that if someone wanted to pull a gun out of their backpack and open fire in the classroom, there would be nowhere to run or hide.  Generally, there is only one exit, and with some 30 people in the room, we aren’t all going to make it the door.
And as I play that scenario in my mind, I suppose it would be a hero’s tale if the professor pulled out his Glock 22, fired back and saved us all.
I realize the fear of being shot in class is an irrational one, but it’s hard not to at least consider the possibility.
Full article.