Yeah, my grandmother died over the weekend too.

I had TWO dead grandmothers this weekend.  It's a shame to off your grandmother on such a trivial assignment.  You'll blow off much more weighty assignments later; you should have saved her for one of those.

Meanwhile, I've sat on these crappy lab reports for two weeks now.  I haven't graded them because they're such shit.  I can handle a class average at the D/F border - but this stack contains nothing of merit.  It's all crap.  I never thought about how many points to deduct on which questions for these because they're supposed to be the easy no-brainer first labs of the term.  I'm supposed to get to flip through them and throw a couple of -2s here and there for units and hand back a bunch of As and Bs and give a few morons Cs.  These are like negative number scores.  I've taught these labs before.  I've never needed an actual scoring plan before.  What the fuck?

So can I kill my grandmother too this afternoon?  I'd rather hand them back tomorrow in the actual lab while they're face deep in the hood and high on ether fumes from the morning's organic lab. 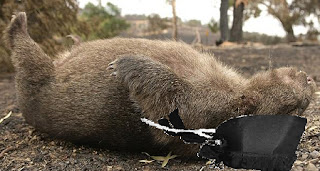 Bonus question:  How many labs could I have graded in the time it took to photoshop a bonnet on a dead wombat?