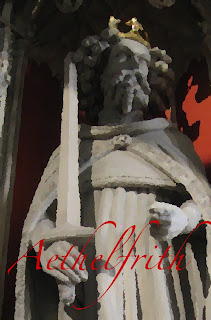 Howdy y'alls, this is Aethelfrith of Annapolis, soon-to-be-licensed Bullshit Artist, and we're here to rock your world.
Unlike most people studying Anglo-Saxon Bovine Excrement Aesthetics, we actually have friends in other fields (we know, we know, we're a traitor to The One True Field—sue us later, mmkay?), like Aethelstan the slime mold wrangler. Stan told us a little story from his time TA'ing Introduction to Field Mycology Class, in which one of his fellow herdsmen was busy displaying a slime mold in full mating plumage, with a few spores leaking out of the fruiting bodies.
Now, slime molds don't just leak most of the time; since it may be a looooong time before a lady slime mold comes along, they have to spread their seed far and wide. Thus, this bit of dog barf was pretty full, and needed just a touch to go off in just the wrong way.
Stan's buddy somehow found the slime's no-no zone.
Normally, this would have been bad enough, except that, well, there was a rather prissy girl in the target area—one who didn't get the message that makeup and low-cut tops weren't appropriate for work in the open range. The spores went all over her—her face, chest, in her hair, everywhere. And slime molds spore fluid . . . well, let's just say that anyone who's ever spent any time on the Internet knew what they were looking at.
What do you do when the slime mold lands a money shot—or when any other unintentionally hilarious situation breaks loose? After all, you can't laugh, much as you might want/need to—and the poor Young Charge, you can't let her be shamed by a protozoa! We are mightily curious; please, Gentle Readers (and anonymous), enlighten us.
—Aeth.