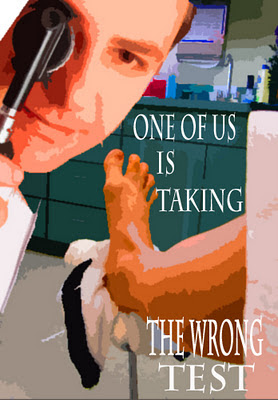 Well, this is a new one. Just got an e-mail from the administration about the new student evaluation policy, and I can't decide if it's better or worse than the old one.

For starters, student evals are now done online, not in class on Scantrons that a suck-up carries to the Registrar's office afterwards.
This is better because: I'm encouraged to go online and add my own questions to the evaluation, and I can actually ask the students a relevant thing or two that'll help me teach the course in the future.
This is worse because: Whatever anonymity the students previously enjoyed, it now becomes total, and it may even feel more anonymous than it is because there's a computer involved. So more students will feel free to get nasty without worrying whether their handwriting is recognizable. Even the students who like me can now write their evals while drunk, which they'd probably do just to say they'd done it.
Then there's this other little change. From now on, students can't know their grades until they submit an eval. If they submit one, they find out their grade right away (or as soon as grades are normally released). If not, they can't know how they did in the class until an additional three weeks have passed.
This is better because: More students will likely fill out evals.
This is worse because: More students will likely fill out evals. (And they'll now do it spitefully, with a passive-aggressive bone to pick with the administration. Good chance they'll take it out on me.)
So I don't know. As my obstetrician asks every time he changes the little lens thingy, is this better, or worse?