Jax from Jacksonville With Some Job Misery.

Hey, all you search committee motherfuckers. Eat me. 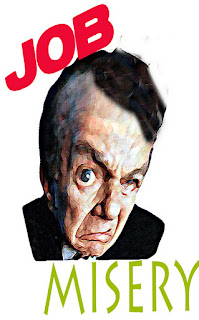 You pricks piss me off.

Listen, it's not my fault someone died or gave up or took a better job at Northern Buttfuck State College up the road. It sucks to be you, I suppose, but treat us last minute candidates like we deserve...we're here to save your fucking asses, and that means taking whatever shit classes you have left over that start in a fucking month!

One Skype interview I had last week ended with one ass telling me that they'd partly decide on the hire based on how "sure they could be" that the person they hired would be in town at least a week ahead of their mid August start date.

Uh, yeah. Count me in. I teach until Aug 8 this summer and I'd like to have time to have a cheese sandwich and some margaritas before I end up in your ass backwards town in West Virginia.

Oh, but I complain, and yet I'm also down on my knees to these assholes.

One phone interview I had this week was in 2 parts. The first was with the department chair and two members of the committee. The chair is kind of a big shit in his field, a lot of books, a lot of cred. And he was great. Then the committee was okay, too, one from the department and one from outside. I had a rollicking 45 minutes with them. Then the chair says, "Uh, there's one other committee member who wants to talk to you. We're going to transfer you to his extension."

And I'm like, well I have to pee, but I guess okay.

Then some silence, then an ad on the phone for a kid's summer camp that started in June and could parents please get their money in.

Guy: Hi, I wanted to ask you the same questions the committee asked. Could you try to give me expanded answers on each?

Me: Yeah, what the hell.

Guy: I would have been on the earlier conference call, but I've been told I'm sometimes a distraction and that I dominate conversations.

Me: Well, let's have it then. And pencil me in for any committees you're on, because I'm a bit of a slacker when it comes time to do the textbook picking.

Nah, I didn't say that last thing. I need a fucking gig so I smiled through the telephone wiremachine and gave him canned answers to his canned fucking questions.

And, during the lulls in my repartee, he told me enough bad shit about his colleagues to make me want to go to Bumblebee Kansas and kill all those motherfuckers to put them out of their misery.

Of course, they'll soon find out that's how I rock at office hours anyway.

PS: I will report when I nail one of these gigs. Let the misery reign.