Hello.  I'm new.  I don't know how to do fancy blurry graphics things yet, or how to get my little chili pepper to wear a mortarboard (heh, heheh), or what exactly this devil-machine is that I'm typing on.  Hopefully I'll figure it out at some point.  But in light of the recent post about the professors our students meet in college, I thought I'd return the favor and write a little introduction to five kinds of students one meets as a professor.  The list isn't exhaustive, certainly, and use of gendered pronouns shouldn't indicate that these taxa are limited to particular genders, only that I get tired of pluralizing everything. 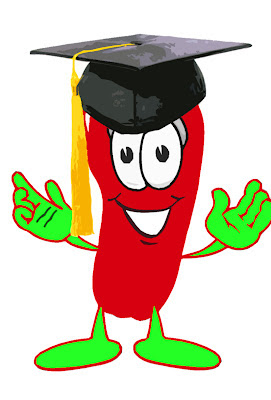 She's here to get what she (or her parents) paid for, and that's a piece of paper. She'll tell you this, unabashed and unashamed, if you ask, and wonder what else anyone would ever go to college for. She wants a good job. That's all. And you're her employee; your job is to serve up the double-latte half-caf skim, and be quick about it.
Favorite Question: "When will I ever use this?"
Common Quotation: "I pay for your salary."
Professor's Internal Response: "Then I demand a raise."

The Grubber:
He wants half credit. Quarter credit? How about a sixth of a point? I mean, yes, the answer was wrong, but it wasn't wrong wrong. You asked for the river that bisects Egypt. The Amazon is a river, and it's in Africa. It's not in Africa? Well, it's a river. This student will wring every precious point out of every question, essay, or quiz. And be very afraid of participation points, because this student keeps meticulous records. He can tell you that he spoke seven times last week. That's four more than he had to!
Favorite Question: "Is there extra credit?"
Common Quotation: "You should grade on a curve."
Professor's Internal Response: "I'm not sure you know what that means."

The Socialite:
She's on the cell phone, texting, checking Facebook. Nothing is as important as what her friends are doing, even though she hasn't seen some of them in the flesh for two years and some of them she actively disliked when she was in high school. Now they're besties! In fact, if she doesn't ignore you, she wants to be your BFF too! The upside, you might get cookies. The downside, she might be a nutter (see the Nutter) in disguise. She is out and about every weekend, and weekends start on Thursday. If your class meets on Friday, you might as well grade attendance now and give her an F.
Favorite Question: "Huh?"
Common Quotation: "I didn't get around to reading."
Professor's Internal Response: "I was drunk on cheap red wine, and I got around to grading."

The Nutter:
These come in several flavors, including the political, religious, and just plain bonkers. No matter what kind of flavor, they dominate class discussion, make you lecture with one finger on security's speed dial on your phone, and generally make your life a stranger place and your job much more exciting. Will they snap? Should you call counseling services about that common about cannibalism, or were they just trying for humor? You can tell this student is truly nuts because other students began approaching you asking you to do something, as if you can wave a wand and make someone sane. They do, at least, give you practice in your "Hmm, interesting idea -- let's move on" face. And the people at counseling services are very, very nice -- and totally helpless.
Favorite Question: "Do your toes ever itch so badly you want to gnaw them off?"
Common Quotation: "We should just build a giant fence and then fill it with water so we could boil all the criminals for soup."
Professor's Internal Response: "God, I hope you're in therapy of some kind."

The Offended:
How dare you? You criticized his writing. You graded his work. You assessed his learning. What gives you the right? Often, this student has gotten by on bluster and raised voices, and so that makes them quite easy to deal with unless you are small in stature, quiet and meek by nature, or easily enraged yourself. Sometimes, this student will try to bend your criticism into a racial or sexist or heterosexist accusation, usually with absolutely no basis at all: gay, white, straight, black -- doesn't matter. You must hate everyone like this student if you gave him a B or failed him for plagiarism.
Favorite Question: "Why is this wrong?" [Accompanied with a stabbing finger at a clearly wrong answer]
Favorite Quotation: "I always got A's in high school."
Professor's Internal Response: "Then go back."