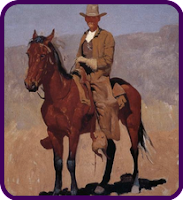 About a week ago, I discovered that one of my favorite authors had been hired on as a proffie here at my school. He wasn't here four years ago. He's here now. I don't know when he started.

It's been twenty years since I first read one of his books. Then I read another. And so on (although, until a few days ago, I hadn't picked up one of his books in years). Let's say one of the books was Old Yeller. Only a heartless bastard could read that book without shedding a tear. Moreover, as it turns out, I had figuratively adopted a similar dog when I was younger and had had to "put her to sleep" myself. There are other reasons I feel connected to this author, too.

So he is a real human being, a good writer, someone with whom I feel connected in various ways, and he even has the office that for a long time was occupied by a friend of mine.

But I also want to go tell this author, "Hey, do you know that you're occupying the former office of a legend? Do you appreciate that his books were on those shelves, that his son's photo was in a frame right there, that his strange old lamp was there, and that he didn't smell as funny as you do? Are you even capable of knowing how many people adored him? Are you going to have the decency to invite me over for dinner like he did?"

Ten days ago, this author was an abstraction. Probably lived in New York, for all I knew. Now, I realize I've been walking by his building for years. I probably have walked right by him without even knowing it.

I just don't want to meet him and have him turn out to be an asshole in real life. He's not a hamster furologist. And I'm not as big a name as he is. Frankly, I don't know if he's that big himself--and perhaps that's why I hadn't become aware that he was here.

But I admire his work and I so desperately want for him to be a decent person.

I feel like I'm in high school. I don't know what to do. Should I avoid him and simply continue to know him through his books? That way, I could continue to think of him as a really swell human being. I haven't made a new friend in a while; I trust the old ones. I'm so exhausted with the beginning of the semester. I can't even write about this without being confused and sounding inept. I wonder if I should drop by his office. I wonder if I'll be disillusioned. I wonder if he'll fail to hold me in esteem.

I wonder if he's a kind person.