I am a colander.


Those bastards in the "real world" sometimes say, "Those who can, do.  Those who can't, teach."

I produce nothing.  I judge everything.

I used to produce.  They damn well know I am able to produce again and hopefully will do so before I die.  But for the time being, I produce nothing.

I'm not like a colander.  I am a fucking colander.

I am used just like any amateur cook uses a colander to separate hir spaghetti from hir boiled water.  Hir goal is to get rid of all the fucking water and keep the good stuff for hir tummy.

My goal is to remove the incompetent, the crazies, the lazy, the underproductive, the chronically ill, the wasteful, the untrustworthy, the mentally ill, and the uselessly high-conflict fucktards.  Yes, that's what I do.  Our society doesn't want the useless stuff in its tummy, so I strain it out. 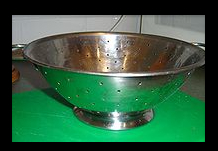 OK, I produce a little.  I teach a little.  And I train a little bit more.  Yes.  I do those things.

But my main job is to be a colander.  Overwhelmingly so.

I've been banged around for years because plenty of students, faculty, employees, parents, and various other stakeholders in the community have fought me.  They have whined, complained, lied, attacked, cried, whimpered, threatened, blackmailed, and attempted to bribe and seduce.

I am a colander.