The takeaway: It's not plagiarism, it's light attribution...and free expression.

(Beginning with some context, for those not from Canadia:)

Canuckistan has a self-proclaimed "national" newspaper, The Grope and Flail. Its political leanings are often referred to as being centre-right, but could more accurately be described as centering the rights and rightness (and righteousness!) of the right. It spends a great deal of time/4 colour ink fellating our Conservative Prime Minister Stephen Harper (taking great care to NEVER muss his hair), and extolling the virtues of (multi-million-dollar) cottage life and $500 bottles of wine. 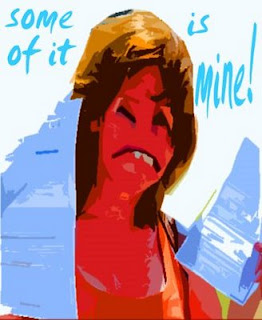 The Grope and Flail's star columnist is a... (pardon me while I grope for an appropriate noun that contains more than four letters and doesn't start with a "c")... well, she's Margaret Wente*. Commentary on her work has graced the pages of CM before...and if she'd seen our work, and it aligned with her political views, she'd have stolen it by now.  Chances are, she was a product tester for that handy iPad app.

You see, Wente is a serial plagiarist.  The only liberal thing about her is the way she "borrows" from the ideas of others. Repeatedly. Unrepentantly. And with a jaw-dropping sense of entitlement.  Sound familiar?

She's also been getting away with it for years.  (Again, sound familiar?)

Carol Wainio, an Ottawa U prof, runs a blog called Media Culpa. She's been documenting how Wente's work fails the journalistic turnitin.com test for years, sending side by side comparisons and detailed proof to the Grope time and again.  However, the Grope's Public Editor (a longstanding Grope insider) apparently wanted to hear about Peggy's blatant plagiarism about as much as the average department chair. Nothing happened...and the internet rumbles grew louder.


Unlike in academia, plagiarizing journalists can be taken to task on public blogs...and Twitter.  Wente's got few fans in academia and amongst educated and social-media savvy lefties (I wonder why?!)...and she's been trending for days, ever since Wainio wrote this blog post, quoting Wente herself as saying "when I was a kid...if you were caught plagiarizing, you got a zero".

...to crickets from the major Canadian news outlets...and the outrage on Twitter grew.

On Friday, The Groan and Wail's public editor released a statement that denigrated and diminished Wainio as an "anonymous blogger" (because we all know anonymous bloggers be crazy and unreliable) and shrugged off the idea that her old friend Peggy had done anything wrong.

That didn't go over well.  Not with Macleans, not with The Guardian, and not with intelligent people on Twitter who believe in tiny things like ethics and standards (and, OK, let's be honest, who also just really fucking hate Wente).

So last night, the Groan Editor releases a statement. Twitter trembles with anticipation (and the hashtag #wenteresignationletter).  Will Wente do the right thing and resign? Will the Groan fire her for breaking the cardinal rule?

Basically, they let her double down in her own column. I'm not going to scar my retinas by reading it again to quote it for you, but it's here if you want to see for yourselves.  Instead, I'll paraphrase. It's full of the kind of excuses that would give your forehead bruises if they came from a student...and the kind of entitlement that gives us all whiplash regularly.  You see, it's not about her documented and repeated plagiarizing, it's about her being persecuted by people who don't like what she writes. (Again, sound familiar?!)  This is an attack on her character and reputation, and it's terrible that we live in an age where that happens all the time...AS IF SHE DOESN'T MAKE A VERY GOOD LIVING DOING THE SAME GODDAMN THING.

Shockingly, it's not flying.

Many of the (highly entertaining) comments on Wente's "apology" point out that students are held to higher standards...but are they really?  Somehow, I don't think many of us would agree. One of the best comments I saw on Twitter last night came from an academic who basically said "Awesome. Now all of my students caught plagiarizing will think they get an audience of millions to say how sorry they aren't."

I know this whole post may seem only peripherally related to academia...but hear me out.

Like it or not (and obviously, I fucking hate it), Wente is a big deal here. She flagrantly cheats and gets away with it.  The powers that be turn a blind eye. When finally forced to deal with the allegations, they react by attacking the messenger. Wente gets a slap on the wrist, and while she's already lost a regular gig on Q because of it, she gets to keep her day job and go on as before, cutting and pasting from the New York Times like students use Wikipedia (and now there's even an app for that!).  The administrator who should have been dealing with the whole thing years ago also goes on as before...and the money keeps rolling in. (Oh, wait, that last part's Evita. Still true though.)


(*And if it's not obvious, that's not a verified Twitter account...but it is a damn awesome one.)