To my Darling Snowflakes, a new year gift 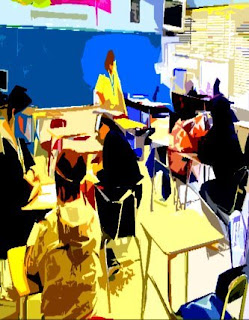 This past term was very interesting. There were 130 of you in my big lecture class, but due to an unexpected administration twist, I had three TAs to help me deal with it all. The result was actually quite fun. I did my thing twice a week and let the TAs handle your BS excuses. You came to me from time to time, which was nice, but I barely had to deal with the lying and plagiarism. What a treat.

And your evals were very kind. I learned that about 20 of you have decided to declare a major in our discipline because of this class. What a compliment! Some of you liked my PPT presentations. Some of you liked my lecture style. A few of you genuinely enjoyed the assignments. Lovely.

But of course some of you had to be idiots.

Snowflake complaint: "You should have more/less reading."

Snowflake complaint: "You should relax about cell phones. You called me out twice and both times I was just checking the date for my notes."

Answer: I had multiple people write a variation of this statement. First, the date is on my ppt. Second, the slide with the date on it is up for the first 5 or more minutes of class. Third, this is complete and total crap. You were texting friends. You think just because there are 130 of you, I can't see the glow of blue reflected off your face when you stare intently into your crotch? Any time there were more than 3 people texting at one time, yes, I paused lecture and reminded you to put your phones away. I said something almost every class because you dunderheads cannot go 50 minutes without being connected to the idiotic wisdom of your inane friends. Cut it out and stop lying to me in the evals.


Snowflake complaint: "You should post the lectures online. I missed class and I was unable to get the notes from anyone afterward."

Answer: Again, lots of people wrote something like this. Darling dears, do you really think I want to perform my lecture acrobatics to a room full of 3 people? Heavens no. That's bull. As soon as I start posting lectures or lecture notes or ppts online, people will stop coming to class. I purposefully avoid posting such things online as an incentive to attendance -- without actually marking people for attending.

Also: I said frequently that you could come see my lectures notes in office hours. Only three of you took me up on that, and two of those three were Jewish kids making up work after Jewish holidays.


Snowflake comment: My favorite thing about your course was sitting next to my girlfriend!

Answer: Edward, you fool, why be so obvious? Although I do have to say that I appreciated you. The first 3 lectures you and Anna were making out in the back row. Very distracting. So when I asked you to be more discreet and perhaps to write notes to each other rather than talking and kissing, you actually complied. Thank you for toning it down, even if she was probably stroking you off during my lecture on hamster origins.

Answer: Stop emailing your professors with this nonsense. Chances are, if you created a relationship with them, they will know you are a dedicated student and round up your grade. If you haven't established a relationship with your prof, then they won't give a damn and your emailed requests will only serve to help us find a reason to push your grade further down.

If only we had one more lecture so I could tell you this... Oh well. Happy New Year, flakes.