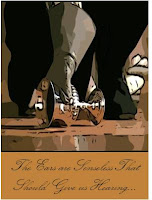 I generally don't pay any attention to Twitter.  Why?  Because it's called "Twitter".  Anything that openly traffics in "tweets" cries out to be ignored.  But the recent post and comments sent me over to check out the College Misery Twitter feed.  And maybe I'm over-reacting here, but our Twitter feed seems to directly mock specific, publicly recognizable, individual students.

Smackdown: sure, it's what we do.  But through it all, we have always anonymized the target along with ourselves.  A while back, a member was outed, and their Dean 'asked' them to leave CM.  If my own Dean were to identify me, I think I would be willing to stand behind what I've posted here.  There is much to snark at in academia.  There is much to criticize, to mock, to rail at, to abhor and to call down heaven's wrath upon.  From Absentee Abigail, through Bookless Bob, Clueless Clementine and on through the alphabet, we snark away, but not at the individual.  Always we mock the absenteeism, rail at the booklessness and abhor the lack-of-clue.  I will call out the admins, the taxpayer, and the business community alongside the absentee student, but I try not to dump on individuals.

OK, I did make an exception that one time for Margaret Wente.

I don't know.  Is there really a big difference between on one of Cal's Vidshizzles and retweeting a foolish student tweet?  Somehow the mockery just seems more direct, more personal, more, I don't know, mean.

I don't often invoke Yaro either.  (I love the guy, but I think the reverence for him jumped the shark back when CM put his avatar on pajamas - just sayin).  But he came to mind as I read 'our' twitter feed, because I can't shake the feeling this was something he wouldn't do.

It might be worth taking the community's pulse on this.