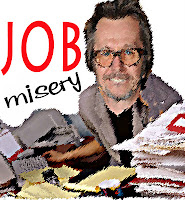 A one year contract comes to an end, and all talk of renewal, and what a wonderful job I do has vanished like free beer around undergraduates. I have less than 3 months left to find something, anything. I was not expecting this.

I've applied for a temporary teaching certificate for 6th to 12th graders in my undergraduate subject. I've sent out applications to sketchy for-profits, counties smaller than where I grew up. No bites. My family lives here, and my parents are getting older. I don't want to leave.

I find myself wondering if is time to go back to being a secretary.

I was an internal candidate and clearly they decided not to interview me. They have not told me I am out of the running, but they avoid me and one of my colleagues did interview. Makes me wonder if people I know won't hire me, how do I get people that don't know me to hire me?

We interviewed a candidate recently. He’s a big guy wearing a dress shirt that seemed a bit too small. While giving a presentation about his research his middle shirt button popped off. Funny huh? Turns out he wasn’t wearing a t-shirt underneath. His shirt stretched apart to reveal a forest of dark belly hair. The audience stared. The candidate gulped. I announced that if this went any further, I’d want some bow-chicka-bow-wow music to set the mood. Everybody laughed and the candidate continued his presentation. We still stared at him for the rest of the hour and didn’t hear a damn word he said. He’s at the top of my list.

On a Skype interview yesterday, the candidate twice made the joke, "I like Skype because I don't have to wear pants." He made it once early. Nobody laughed. He made it again at the end.

A candidate wrote a lengthy thank you note, which is fine, but that contradicted three pretty important claims he made during the interview about his actual experience in a sub discipline we need covered. That's not fine.

A VAP job I applied for and campus interviewed for 2 years ago had listed the job again 1 year ago. The first time they hired a grad student from the same institution. Then the second time the job was listed I got a phone interview. They hired the grad student this time tenure track. This year I applied again (yes, I'm stupid), and got another phone interview, with the same committee and same questions. They hired another grad according to the wiki. I haven't got my rejection yet, but I've already got my letter ready for their position next year, too!