In the comments to a recent post, Surly Temple's excellent rant brought some of my own students to mind. I hope she doesn't mind if I turn it into a post unto itself. 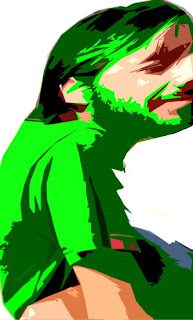 I have a (HS) student who is distracted and distracting during class, often blurting OVER me while I'm talking and constantly trying to hijack the discussion with irrelevant personal anecdotes. He's also the kind of student we describe as "slimy": smart enough to behave in school and around adults, but sketchy and unethical everywhere else.

At the end of every class (and we meet daily, so I mean Every. Single. Class.) on his way out he turns to me, smiles, and says "Thank you! Have a great day!" Every time it happens, I feel icky and manipulated. Except that he's a callow teenager who is about as good at manipulation as he is at taking tests, so it's more the ickiness of someone *trying* to manipulate you and thinking he's getting away with it.

Ah, yes. I've been trying to think of a good alliterative moniker for this archetype. I have two exemplars right now, in different classes, so I see one or the other Every. Single. Day.

Big Ol' Doofus is distracting, but his heart is on his sleeve. He means well but just hasn't grown up yet. All I have to say is, "Naaaaame?" and he laughs and says he's sorry and then raises his hand appropriately for up to 10 whole minutes at a time. Then he finishes up class with a cheerful, "Catch ya next time, Doc!" Yes, Doofus I can chuckle about.


It's Mr. Smug, who believes he's too smart for community college, who gets to me. He complained in class about being "punished" on his first assignment for listing more data than I'd asked for. Did the data provide what the assignment asked for? No. Were they even realistic? Not really. And I'd said right on the sheet that students would get full points for following directions (the real point of the first assignment) and only half points for not. But here he'd done more than I'd asked for, and he was being punished for it.

So it was a real pleasure to hand him back the first test with its 50% mark, though he didn't seem to register that he now has a cumulative F. See, he's not into details, he told me. He's a Big Picture Guy. And then he smiled and nodded and waved as he headed out, as if we had an understanding that he's the class star, head and shoulders above the struggling masses.

As Surly said, "he's . . . about as good at manipulation as he is at taking tests, so it's more the ickiness of someone *trying* to manipulate you and thinking he's getting away with it."