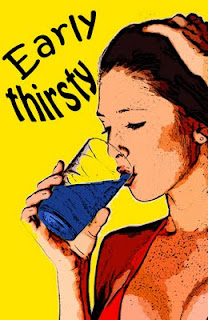 So yesterday I read this little gem from the Crampicle about how all academic failure is basically your own damn fault, especially if you fail to seek a Decent Number of Quality Mentors. It's not the mentors' fault if they suck--it's your fault for not finding enough of them.

The same day, I got an email from a grad school mentor informing me that zhe has managed to overextend hirself for the foreseeable future and will be unable to write the rec letter zhe promised me not even a month ago. A rec letter that, as I tried to explain to hir, has basically already been written (by hir own hand), and would simply need to be readdressed to a new committee.

Add to this epic failure of time management the fact that I emailed my adviser about the same rec issue more than a month ago and have yet to hear back from hir. Strike two.

The only long-term mentor I've been able to count on has, in fact, been carrying on a torrid affair with a former grad student (creating the department's most scandalous open secret), so my professional trust has been severely curtailed by personal disgust.
Times like these make me wish CM weren't pseudonymous, so I could request a recommendation from Cal. Or Leslie. Or Stella. Or Strelly, as long he promises not to blow up my school in return for the favor. Really, I'm open to mentoring from whoever won't magically turn into a flake as soon as I ask for a goddamn letter. And, seriously, the CM gang collectively does more for my professional morale than any of the actual or would-be mentors I've ever met.

But, alas, my friends, I know this solution amounts to an impossible dream (as does my idea to reach a cattle prod across the ocean and buzz some sense into these supposed role models). And so, in my effort to combat the negativity of these mentor-flakes, I humbly submit this Early Thirsty:

Q: Have you ever been contacted (more or less) out of the blue for a letter of recommendation, or some other mentor-like duty? What would persuade you to accept such a request from someone you might have met only once, or know of but don't really know well?