An Old but Good Overview of "Failure" and the PhD

This is making the rounds on various websites today. It's from 2005, but maybe it is gaining traction because it remains so pertinent -- perhaps even more so since the recession and slow recovery among state-funded universities. 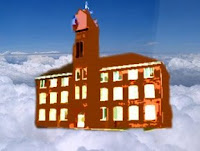 "Failure, says academic culture, is anything other than achieving the ultimate goal of a tenure-track professorship. More specifically, the epitome of success is a tenure-track job at a major research university. You're still successful, albeit to a lesser degree, if that job is at a liberal-arts college, and even less so if it's at a community college. But a nonacademic career, well, that's just unacceptable."

The article goes on to cite a study out of Berkeley about what grad students' and recent PhDs expectations should be by following them for 10 years and reporting on their professional status 10 years later. The study found 58% of English PhDs found tenure track or tenure within 10 years. And this was for people who graduated in the early '90s. (I shudder to think what the numbers are as so many institutions have begun to embrace adjuncting and online learning without possibility of tenure)

This really struck a chord with me: "A Ph.D., thrilled to land a faculty position at a liberal-arts college near her home, is asked by her dissertation adviser when she was going to "get a job." Presumably, a 'real' one."

I believe this tells us a lot about what drives the all-or-nothing goal of getting the ever more elusive tenure track job. In order to build the prestige of the school, and the position of a scholar within a school's Department, one needs students who come through the program, pay some money and contribute very low-paying labor, and then move on to become stellar scholars. By proxy, the success of the student in a specific field builds the aura of success for those who trained the scholar.

But if the scholar moves from academia to the private sector, begins to earn $150,000 a year and has kids and a great life/work balance in a totally unrelated field, it cannot lend to the school's reputation for building scholars. And grad students begin by wanting to be their professors. You do not get a PhD in History in order to change plans when you are 35 and become an administrator or executive. That doesn't appeal to today's 22-year-old searching "Best Graduate Programs."

So to enhance their rep, schools and profs engage with this rhetoric about how grad students need to keep pressing on. They are disappointed with any move away. Even my adviser met the news of my exciting job with a shrug, because it is being in charge of a research center rather than the glorified tenure-track position. So he has yet to congratulate me.

But Megan, who got a tenure-track job 6 years ago in Utah? Oh, he LOOOOOVes her.

This attitude doesn't really serve grad students or academia. This is a rapidly shifting economy that hopes to kill of tenure as soon as possible. Requiring "success" to be defined by gaining tenure -- even if that means moving to Montana, 6 hours away from the nearest airport and without access to family or long-standing friends -- rather than by good pay, job security, and life/work balance only sets our students up for the REAL failure: being miserable in your job and feeling like you can never leave.

After all, the Montana T/T person "won," right?