The Miseries of Summer from Lucy from Leadville.

I'm teaching a summer section of online hamster writing for freshman. It has its tolerable moments, and overall the extra money is worth the occasional hassles, but it also has its fair share of minor miseries. And now, a compilation: 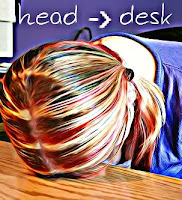 Overtime Othello
I received this email a full three weeks before the class started, right after the course became "available" online but before I'd posted the final syllabus: "Im in your online comp class this summer and I cant seem to open the syllabus. Also id like to know if the first discussion needs to be posted by last friday 24 or tomorrow friday the 31st. Im also working this summer so if you could send me that syllabus i will be able to more accurately allocate my time in the workplace." I let him know that the course hadn't begun yet, so there were no deadlines for him to worry about.

Volunteer Victor
After I sent out the syllabus a couple weeks before the beginning of the course, Volunteer Victor sent me this: "I am leaving the country to do a volunteer program about 2.5 weeks before the end of the course. It will be very difficult for me to work on this class once I leave. Because of this, I was wondering I could do as much as possible before I leave. I know that this class is not self paced, but if I could have access to assignments to work on them earlier, it would really help me to be able to succeed in this class."

The course is already my regular 16-week course crammed into 8 weeks, and I had to take out a paper to make it fit. It's hard enough for students to complete the course in 8 weeks, let alone 5.5. I told VV that while it was technically possible to pass this way, I didn't recommend this and could not guarantee that he would pass. He didn't respond, and then he went on to turn in everything three minutes before every deadline and fail the first paper. I later learned that VV is a senior retaking this course to get a higher grade, and that he's taking two other summer courses, both of which need to be completed early too, I guess. Right. Have at it, it's your stupid life.

Weirdo Wayne
Finally, the course began, and a few days in, Weirdo Wayne requested an override (I like to override as many as possible so that I still get paid the regular amount despite the inevitable drops). He got in, and then asked: "I would like to keep a very low profile in this class. Can I use a pen name?" Uh, wtf, no. (I googled his name and found a bunch of pictures featuring WW holding assault rifles. We live in a purple state with blue leadership that just passed some controversial gun control laws. He apparently lives in a famously liberal town. I'll let you draw your own conclusions. Thankfully, he later tested out and dropped.)

Tardy Tom
This fellow joined the course in the first week a couple days after it started, but he didn't start doing work until riiiiiight before the first deadline. And he apparently didn't catch on that reading course materials is, like, a core part of doing coursework, so everything he did turn in was incorrect: he didn't use the assignment submission link; he didn't see the dozens of places where I posted that Hamster Language Association style is required; he didn't see/use the example assignments or the textbook reading or the assignment sheets explaining EXACTLY how to do the first project. So, so wrong. Please, try reading. Anything. And stop sending me shit via email when there's a perfectly good course link to submit your work.

Plagiarizing Patricia
My course has weekly reading quizzes that are worth altogether 8% of the total points in the course, or 1% per week. These are mostly just to get my students reading and thinking hard enough to pass a basic quiz over content, but sometimes I have them practice skills, too. In the hustle and bustle of updating the course and fixing it for a shorter term, some quiz questions now are a bit less connected to the literal course reading than they were when I wrote them. Plagiarizing Patricia found one such question after she lost a half-point on it, and she requested that I give her that half-point back. I did, though I bitched at my computer screen as I did so. Who the fuck asks for a HALF-POINT back? that is literally .05% of the total course points. It will not even factor into the total points in the end. Whatever.

I got my comeuppance when PP plagiarized significant portions of her second assignment. I found it on the draft and reduced her score by 5 points. (If it had been the final copy, she would have gotten a zero, but the draft is the place to make that mistake. I only reduced her draft score to get her attention and to illustrate that this was a serious problem that absolutely needed to be fixed.) Good thing you got that half-point back, PP!

Keener Kendra
Things had gone fairly well for a couple weeks, and then Keener Kendra started getting antsy. First, she emailed me to ask why she "lost" points on a paper that she got an A on but not 100%. I explained that the rubric is a handy resource and that she didn't "lose" points but rather did not earn the full 100% -- her paper was of A quality, not A+ quality.

Then she turned in a draft of the major research paper, and I had a number of questions and comments in my feedback. In drafts, the students get this feedback AND free points so that they can fix any problems before the final copy is due. It's a kindness! I don't read drafts because I love to spend my time reading shitty essays that don't make sense. I do it because I'm a teacher and it's my job and this is a great way to help them, and giving them points for starting essays before the deadline makes both of our lives easier. KK's argument in her draft didn't make sense and it included a number of statements that were simply incorrect. I commented with my questions and included some thoughts about resources she should use to help her understand the concepts that were unclear in this draft.

A couple days after I returned her draft with comments, she emailed me a 750-word-long email asking about every single comment I made on her draft. (The paper in question needs to be about 2000 words, soooo, yeah, writing me a super long email that doesn't have any paragraph breaks in it is totally a good use of your time.) She was upset because "this is a topic that I'm very passionate about and have spent most of my life being immersed in, and I felt at some times your feedback was a bit harsh and that my essay was poorly written and I have no idea what I'm talking about." I'm so harsh when I say that this word doesn't mean what you think it means! I'm just simply the cruelest person because I feel the need to point out, as your writing instructor, that your thesis statement doesn't argue anything. THE WORST.

Her email mostly explained what she meant by the various incorrect statements that she made, and she also spent a fair amount of time asking me if I really meant that she should fix the errors/problems I pointed out all the way through her paper. I will never understand why it didn't occur to her that the fact that she had to send me an entire email to explain that her essay really did make sense only served to underline my point.