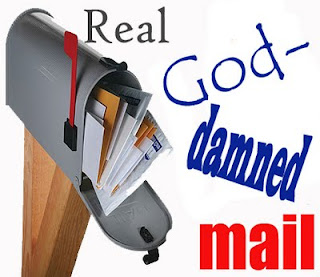 Email 1:
I know you're all humanists and mostly concerned with students' feelings, but the recent graphic for a linked article (won't you give up those, BTW), contains a simple math error. 86+24=110, not 100. Sure, it's a small thing, and you're all so busy and all, but whenever we post something on the page it should be as good as it could be. I only write this because I sent in a correction earlier and the item wasn't changed. So ignore me some more if you must, but I wanted this on the record.

Reply:
The joke may not be very funny, but it only works if the girl in the graphic - and you know she's not real, right, she's just a poorly rendered image of a student - gets the math wrong. The joke - okay, it's not much of a joke, but I did it at 5 in the morning - relies on her being stupid enough to not be able to add - or subtract, I guess - the number properly. If she KNEW it was actually 76 and not 86 that completed the 100%, then she might indeed be smart enough to be ready for college, even some second rate state school. But, I heard you the first time, and didn't "correct" the graphic because I intended the math to be wrong, as part of the joke - and, sure, it's not much of a joke, but how much did you pay to see it, while we're at it.

Email 2:
I don't understand the sidebar stats. Are you saying that more than 6 million people have viewed this page? There's no way that's happened. I only see a few people who post or comment, and I'd guess there might be 60 or 600. Or is it because everyone who reads it presses refresh so many times? I suspect all the stats are made up anyway, but you've featured it so I feel comfortable calling you on it. And I don't see 4000 posts. It looks like there are only 90 posts this year. Are you saying you've been posting articles for that many years? You'd have to have been online since 1970 for there to be that many. Oh, and 100 million seconds? Who tells time that way? It's a big number, I guess, but it's useless because it's given without context. Just post the emails and leave the numbers alone. Someone with your math skills are best left to fingerpaint.

Reply:
Uh, I don't know where to start.