An Early Thirsty on Grade Distribution from Atua Bear. 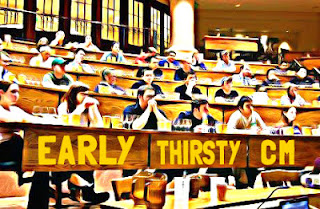 I'll admit that I'm at a top university in the nation for some programs, though not all. The university is private and thus expensive--that's about all I can say without giving away my identity. Prior to this appointment (still a doctoral student), I was at another university (public and cheaper) where the average was about a high C; the university was ranked much lower than my current private institution. I'm actually surprised that the public institution had lower grade inflation than the private university... of course, the private, elite institutions have a reputation to protect (thus they inflate grades), but shouldn't public schools be doing the same in order to compete with private universities? I haven't noticed my private, elite students being smarter than my students at the public university, so I don't think the inflation discrepancy is a consequence of smarter vs not-as-smart students.


Q: What's the grade average that you aim for, or that you are told to aim for? Do you consider this average as grade inflation? When you were untenured did you worry more about having a certain average? Do ivy/elite universities or lower-tier universities have more incentives to inflate grades? Have any solutions to the problem of grade inflation?