4 Years Ago on RYS. "Why do I Bother? AKA It's That Time of Year Again AKA Can I Quit Yet? Vic From Vegas Asks All The Big Questions." 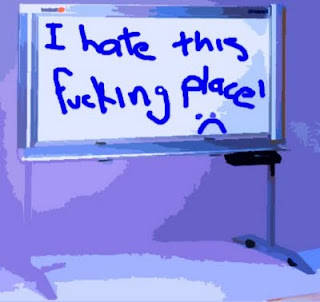 The 'flakes had a holiday last week, and then another, unexpected one earlier this week when I had to cancel class. I figured that in the interim, they might actually get their drafts done and bring them in for my consideration and for their peers to edit.

Silly me. Stupid, silly, naive me.

Out of the 2/3 that bother to come anymore, only a handful had their drafts. The rest sat around for about an hour and socialized until I told them that their assignment was now late, but, since they didn't have their flash drives and were not inclined to print out papers anyway, they might as well leave and bring the blasted things on Monday. One came to me to confirm what I had just said. I pointed out to him that the draft due date should have come as no big surprise, as it has been on the syllabus since the beginning of this semester--August, to be precise. "Oh, I never look at the syllabus," he replied. Well, that explains a great deal, does it not?

Out they went, more than half an hour before class is officially over. I started messing around on the computer. Then a Huxleyan Epsilon-Minus Semi-Moron entered the room and asked if this was Professor So-and-So's class. I explained that the other prof's class does not begin until 9:45 or so, and it was only 9:00. "Ohhhhhhhh," said the Moron, pointing at her empty head, "I'm not really here today."

This also explains a great deal.

I want answers to 3 questions: Why do I bother to show up at all? I could use up a lot more of my sick leave hours, which accumulate indefinitely, and still get paid. Why does this happen every semester when there only a few weeks remaining? And can I quit this mess yet and go into another line of work? Surely it's not too late. I am adjunct, after all, and not exactly beholden to this place.