"Of Students and Squirrels," from Dr. Magnus. 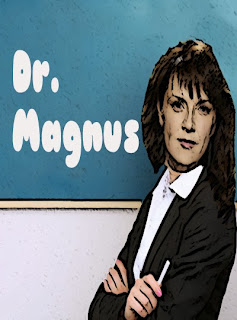 At the Sanctuary, we are in danger of being overrun by a species of pest known as the Snowflake Squirrel. They take human form, but like their relatives in the wild they run toward danger and learn nothing from their narrow escapes, vocalize vehemently as soon as they sense anything dangerous, and throw nuts at people.

Here are some examples from our recent observation of snowflake squirrels in the Sanctuary:

1. "Dr Magnus," one asks as he stands in my office door, "I have to study for Dr Tesla's scary test. That test is right after your class, so I'm not going to be in your class because I'll be studying for it. We aren't doing anything important in class, are we?" Who, with a brain cell left in their body, says this to a professor? Think it, sure. Act on it, maybe. But tell the prof that you are doing it? No.

2. "Dr. Magnus," says one snowflake squirrel standing awkwardly in my office, "your class on Hamster Algorithms is so boring. I mean really boring. I know all this stuff already. The assignments you give just like the ones I did at Other University. Can you increase the difficulty of this class?" I remind him politely that the class is for beginners. His reply? "Well, can you rack up the difficulty, like really quick? I'm bored" He feels that I should change the entire class to challenge him? Who tells a prof their class isn't hard enough? In my day, only an idiot.

3. I subbed for another prof recently, the esteemed Dr Watson. Dr Watson asked me to give his students some problems to work during class. The snowflake squirrels, on the other hand, groaned, moaned, stared blankly at the sheet of paper, and started making chattering noises that signify they sense danger. The danger? They had to THINK. Perish the thought.

4. And one last example from my days as a student. A professor had forgotten his watch an asked the students to let him know when class was over. A snowflake squirrel indicated class was over fifteen minutes earlier than he should have. I don't what happened to him, but I don't think he ever came back to class. Last I heard, he decided to go back and pursue his music career in a rock band.

I would like to hear your experiences with the Snowflake Squirrel, in the interest of shared knowledge and research.

Note: Names have been changed to protect the guilty. This post was not written under the influence of medicinal products, illegal drugs, or alcoholic drinks. The Snowflake Squirrel, unlike the fox in my previous post, is a symbol. Although I think a mangy, old fox would make a great metaphor for some types of sly and cunning faculty members ... but I digress.