A CM Flashback To One of Our All Time Favorites, The Bitchy Bear of Boston. 3 Years Ago Today.

An Open, Bitchy Letter to My Students, and Any Other Students Much Afflicted by Their B+ 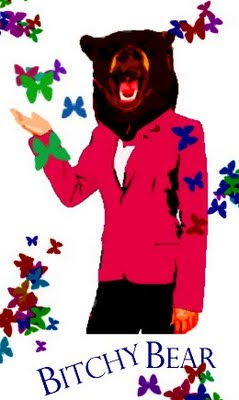 Ah! The B+!! It is the cruelest thing in the world, isn't it? You, my lucky young friends, having been born into one of world's wealthiest countries where everything from frozen yogurt to dirty pictures* to celebrity gossip is but a Paypal click away, are unused to hardship. Even more, you have been fortunate enough to be the children of parents willing, nay eager, to spend $50K+ a year for your education, and probably have since you entered this fine world. I get it. You haven't really had your back up against the wall.

So, of course, when presented with the B+ you earned in my class, you are in turn outraged/devastated. Grief is a terrible emotion. It tears into your soul. Since I turned off my email the day before Christmas and haven't gotten back to you, you have written me emails every single day. Every. Single. Day. So intense is your grief that the emails change in pitch, day by day, as you believe that I am indifferent to the terrible injustice I have done to you. Why am I not in my office Christmas Eve, Christmas Day, hell, EVERY day waiting to fix this blot on your soul? Where in God's name am I? THE HUMANITY!

Only one of my B+ recipients has failed to fill my email box with her daily wails. Let's call her J. J was called alway to Hong Kong in October for her mother's death--a real death, not that kind that crops up when you need it to. You could tell it was the former rather than the latter: J came to class the week before she left for the funeral, and this normally lovely, bright-eyed, well-dressed girl dragged herself in to talk to me, her eyes red-rimmed, her face pale, her hair stringy and uncombed, her eyes fixed on her hands. She was barely able to answer a simple question. When she returned, she remained a zombie; her pixie's frame, which darted around at the beginning of the semester, moved as though she had to swim through molasses. She smiled, but the smile never reached her eyes—not once during the two remaining months of the class. She burst into tears during my office hours. "I"m so sorry! I'm so sorry! I was just thinking about something!" she cried. She is only 22, and while I get impatient with people who want to infantilize college students, 22 is awfully young to see your mom go into the ground.

She wrote me an email on Christmas Eve, too. "Dear Dr. Bear: Thanks for all your help this semester. I really enjoyed the class. And thanks for working so hard to make it fun."

That's it. That's all she had to say.

It is my experience that students are quite literal, so let me explain what I am getting at here in less abstract terms: there are bigger things on your horizon than a B+ in my class, or any class. There will be children, tragedies, triumphs, cancer, Alzheimer's, cheating spouses, divorce, people you trust who betray you, losses (real losses)--a million things a million times more important to you than what grade you got in my class, which I doubt you will remember in ten years.

One of my major flaws/features as a professor is that I never cared very much about grades when I was a student. I thought grades were childish. I still do. But I have to have to some way of giving you feedback to help you understand how you are doing, and the world wants us to have grades, so there you are. And so I freely admit that I am less sympathetic to those of you for whom your B+ is the Worst Thing Ever. When I was a student, I generally thought "a B! Gnarly!" (Yes, we said gnarly back then. Shut up.) I went to an undergrad institution where there were no pluses or minuses, so an 89 percent? It was a B. Just like an 81 percent. You sucked it up. Thus, in addition to wanting you to understand that, as in J's case, you will have to learn to cope with real pain, I also want you to understand that a B+ is actually a GOOD grade, not a bad grade.

Finally, the nice lady that handles grade changes is out of the office visiting her family in China until January 15th. So even if there has been a mistake, we can't fix it until then anyway. How's about you stop sweating it, stop pestering me, and just chill until January at the earliest? I know this means carrying around a frightful burden, but, please, try to be brave and carry on, despite the many trials you must bear, until then.