An Early Thirsty From the Wombat: Lecture Vs. Lab. 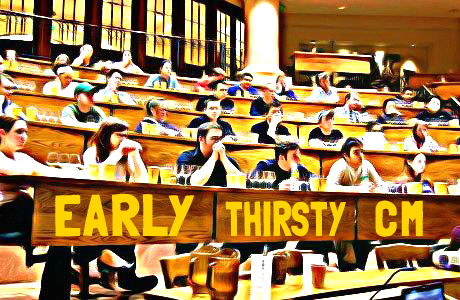 During my first semester of teaching, I taught lecture only. It went well. My second, I taught lab. It was Kindergarten Cop meets Lord of the Flies. In my first summer session I taught at a different school, with a different lab book. It was a roaring success. My second fall I was back at the CC and it was a zoo all over again. By mid semester I resolved to figure out why I could handle students in lecture, but not lab, except that one session when I COULD function and teach in the lab. I finally figured out that it was the difference of student preparation. The State College required "prelab" exercises. I wrote some of my own to use at the CC and wallah [sic] I gained control of that class.

By the end of my second year I had written a bunch of pre-lab supplements to go with the CC lab book. I used them in my class and offered them to other professors. Some of them were printed up in custom versions of the lab manual we use, but I had never been asked and I never got any credit. Not in the money sense - I don't give a shit and I don't know what dollar amount you could put on it, but it would be trivial, and I'm pretty sure no one makes money FROM the publisher on those custom deals. I never got any credit as in the original author is listed and our department head is listed as the "editor of custom version" or some crap like that, a few adjuncts are thanked for their "suggestions", and my name... nowhere.

Since then, five or six other people have leap-frogged over me (primarily because they have PhDs and I have an MS, which for the most part, is fair) to permanent instructor jobs and no one acknowledges what I do there.

I've been told not to give up on a permanent instructor position because PhDs aren't required and I'm such a good teacher and all they really care about is the teaching blah blah blah yet they hire people who 1) know chemistry less well than I (Ben, back me up, no one who says "Why do we have Ammonium Hydroxide instead of Aqueous Ammonia, did we run out?" should get tenure.) 2) can't teach for shit. They can't. The chair is always asking me to share old tests and rubrics with new TT faculty because the hot shots can't teach.

I'm spending the break writing a writing guide to go with the department chosen lab manual. It's not going to be anything particularly great or novel. I'm not a great writer in the first place, but many of my students are incapable of writing an actual sentence and they can't even see the difference. It will be distinctly un-publishable. It will be a glorified lesson plan, not a textbook on technical writing. It’s for my own use with my own section. But after I do it once, it will be something my chair expects me to share and then everyone will use it and they will "forget" who wrote it, and some other Doctor Fancy Pants will get the next TT position. So I want to put my rancid wolverine piss all over this.


Q: How do you do that? How do you make a record of your work so your department can give it out without acknowledging you?