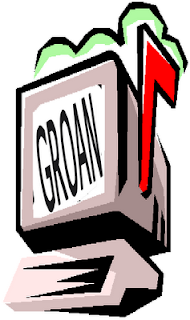 I don't know which I like least, the hyper-apologetic, sometimes self-flagellating, emails begging me for an extension, which are often accompanied by far more detail about students' personal lives than I need or want to know, or the ones simply announcing that a paper will be late, with the implicit assumption that I will approve an extension. The latter are often accompanied by an equal level of detail about the activities in which the student will be engaging in lieu of finishing the paper, but the tone tends to be  self-congratulatory.  The list of things students will, by their own accounts, be doing this weekend/early next week in lieu of working on the paper(s) they owe me includes teaching Sunday School, going on a major-related but nevertheless pretty glamorous-sounding out-of-town trip, and saving lives (a shift as an EMT).  They will also be supporting family and friends through various difficulties, and -- an ever-popular option when there's important academic work to be missed -- playing airport-shuttle driver (despite the fact that we have multiple professional services of that sort available in our area, the airports are all accessible by regular public transport, and the drive to the farthest one can eat up a morning or afternoon at most, not a whole weekend).  They are also, of course, studying for exams in apparently more important classes.   At least no grandparents have died.

This term, I seem to be getting more messages that simply assume I will approve an extension. I'm not sure why.  Maybe it was something in the wording of the whole-class end-of-semester reminders email, which included a reminder that anyone who wouldn't be done with the final paper by the deadline should contact me to discuss an extension?  Or maybe there's a change in student behavior?  Or some anomaly landed a higher-than-usual proportion of narcissists on my class rosters this semester?

Whatever the reason, I'm not feeling energetic enough to wrestle with these characters via email this week, so there will be no challenges or consequences to the self-congratulatory email writers as long as I get their work by the drop-dead deadline specified in the syllabus.  But, as the instructor in a class that is supposed to emphasize adapting tone, content, etc. to the situation, audience, etc., I wonder whether I've failed somewhere along the way.  Or are they just misreading the nature of the situation? Or reading it all too accurately?