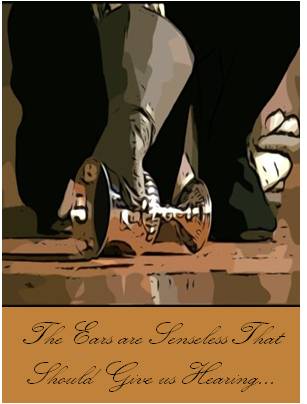 The man stepped into the room and scanned the bank in front of him.  No fire.  No spark.  No signs of life.  Just wet snow sitting thick and sullen and gray on the cracked and wobbling fiberglass seats.  The far door banged open and shut in the wind.  With each gust a few more flakes wafted into the room and floated aimlessly for a moment before settling into desultory drifts in the back corners.

The room was cold.  Above the man’s head an old duct with a rusting grate still blew, disgorging more dust and mold than warmth.  The scavengers had taken most of the heat.  They had taken most of everything.  He had encountered the scavenger bands at times.  Their trimmed beards and whitened teeth did little to
hide the steely gleam in their Lasik-corrected eyes.  They came armed with ledgers and budgets and they brandished strategic plans.  And always they demanded more.  Like rats at the carcass of a fallen muse while the ivory tower faded and became caked with ash.

You know you’ll never beat them, the woman said.  She looked at him through the candlelight.  You have only ideas and ideals and you know they aren’t enough.  There are more of them than you can imagine.  It was the last night he saw her, and he knew that she would leave him.  They had sat awake countless nights on the battered futon debating their careers.  He had pleaded with her to stay.
It will get better.
No it won’t.
It might.
And she rose and walked out of the school, away from him and her unfinished degree.  Out of his world.  Into a different world where she was unreachable.  Public Relations.  Or Real Estate.  In San Diego, last the man had heard.

The man started from his thoughts.  He looked frantically about the room for the boy.  But he was there, where he always was, patiently waiting to hear what the man would tell him.  He was perched on a seat to the left side of the room.  One that wobbled less than the others.  Beside him a fallen seat dangled from its anchors.  No-one would repair it.  The man hadn’t seen a repairman in a long time.  Most had fallen prey.  And those lucky enough to escape had taken to hiding in the management building afraid to come out.

*     *     *
Here, read this.
What is it?
Just read it. Tell me what you think.
It’s old.
It’s primary literature.
The boy started to read.  The man watched as he grew absorbed.  And then surprised.  And then his face lit with pleasure.  He watched the boy savour the idea, feed on it.
So that’s how they discovered it.
Yes.
Where did you get this?
It was with the other things thrown out from the library.
Why did the library throw things out?
To make room for a Starbucks.

The man tried to remember when it had started.  Was it long ago?  He could recall no cataclysm, no apocalypse.  Just less and less left.  A trickle of refugees became streams became a rising tide.  They shuffled from town to town hauling their lecture notes in worn out briefcases received from proud relatives when they had gone off to graduate school.  Now they needed three jobs to cobble together the thin gruel that would ward off starvation.  But still there were no sirens, no explosions, no howls of rage or pain or horror.  Only a world-ending whimper.

How much longer?
Two semesters.
Until commencement?
Yes, until we get to commencement.
What happens then?
That depends.
Will there be jobs?
Some.
But the good guys get jobs, right?
Well, sometimes.
What if they’re all gone?
Keep going.  You’ll find something.
Okay.
Okay.

The man sat a long time after the boy went to study.  Commencement would be the end for him.  He could feel it in his bones.  He couldn’t survive another semester in the snow.  He had pinned all his hopes on this last year.  On reaching commencement and the spring.  On there being something there.  Anything.  There used to be pensions.  But the scavengers were many and thorough, and pensions made attractive targets.  They weren’t safe.

The snow had mostly settled and fewer flakes drifted into the room now.  The man pushed his cart forward.  Its broken wheel twisted and the cart lurched, nearly dropping its precious cargo onto the stained and yellowing linoleum.  One of the last working projectors.  Its casing held closed with electrical tape, it had an old VGA connector that had to be wiggled to carry a signal.  But it would shine an image on the faded screen.  It carried the light.  The man set it in place and faced the room.
Okay.
We should get going.