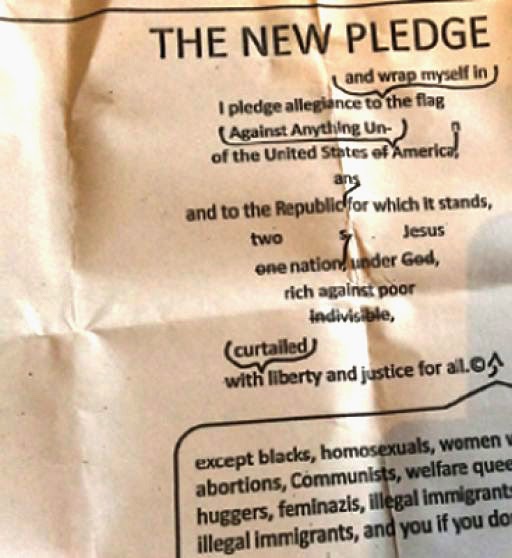 If you sign up for Denver college professor Charles Angeletti's American Civilization class, be forewarned that you're going to have to recite his invective-filled 'New Pledge' -- and according to some of his students, also be ready to swallow a big helping of his politics.

Angeletti, who teaches at Metropolitan State University of Denver, has students learn an anti-American spoof of the Pledge of Allegiance that denounces the U.S. as a Republican-controlled bastion of injustice, all while spewing his own far-left brand of politics, according to current and former students.

“I pledge allegiance to and wrap myself in the flag of the United States Against Anything Un-American,” reads Angeletti's version. “And to the Republicans for which it stands, two nations, under Jesus, rich against poor, with curtailed liberty and justice for all except blacks, homosexuals, women who want abortions, Communists, welfare queens, treehuggers, feminazis, illegal immigrants, children of illegal immigrants, and you, if you don't watch your step.”