I dread this time of year. 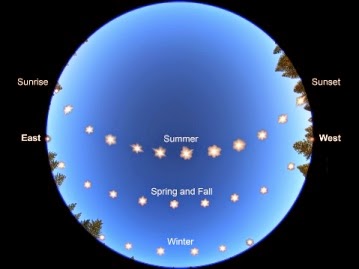 The Vernal Equinox is coming up next week. I dread it. Every year, the TV news calls, wanting me to do an interview. I spend the week hiding in my lab, since no one in their right mind would follow me in there. (My grandfather Viktor would have been proud.)

The TV news people don't want to hear what I have to tell them: it simply is not possible to explain the Vernal Equinox to a TV audience. It requires that they keep at least three unfamiliar concepts in their minds simultaneously. They'd much rather change the channel.

Nevertheless, here’s what I have in case I'm cornered. I designed it so that if I'm interrupted at any point between paragraphs, it still makes sense (to me, at least).


The Vernal Equinox is the beginning of Spring in Earth's Northern Hemisphere. It is the date and time when Earth's equator points directly toward the Sun's center, during this time of year.

Because of this, the Sun rises due east, and sets due west, on the day of the Vernal Equinox.

This also means there should be 12 hours of daylight and 12 hours of night during the Vernal Equinox. In fact, the daylight is 4 minutes longer, because of refraction in Earth's atmosphere.

The Vernal Equinox is traditionally on March 21. It can be between March 19 and 23, because of leap years, which happen because Earth's year isn't exactly 365 days long. This year, it's on March 20, at 3:45 p.m. Pacific Daylight Time.

It takes over a month for Earth's oceans and atmosphere to warm up. This is why it can be weeks after the Vernal Equinox for the weather to feel like Spring.