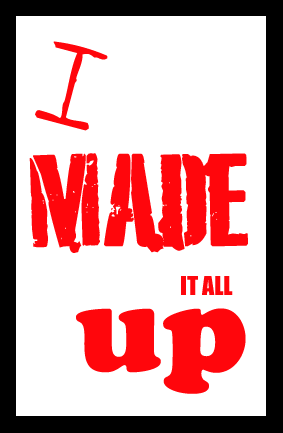 In November 2005, during a gloomy office hour at my community college in Georgia, I made up a website called RateYourStudents. It was just a gag. I called myself "The Professor."

I made up other names and identities and posted shit that was on my mind for a few months. Some other academics found it and sent me entries, most of which I never used. I would post something on my own, always highly fictionalized, and did it for the lulz.

I started to create characters along the way; nearly everyone who ever appeared on RYS was just me. I felt badly about it after a while. Because of my boredom I kept the thing afloat for 5 years, creating a vast piece of performance art that stunned me. Why I had the energy, I don't know.

All of those national news articles in the NY Times, Chicago Tribune, LA Times, Chronicle, etc? I made them up, too. I got pretty good at spoofing well known news and education publications and created a whole mythology about the site and its large following. The truth was, there were never any more than a dozen page visits in any given month that didn't come out of my office or home computer. (My wife had left me during this time, for an oil and gas roughneck from Texas named Bubba, and I had a lot of free time.)

I felt badly about this in 2010, so stopped the page for a few months. When the boredom overcame me, and my cat Archie ran away, I started College Misery. It was pretty much the same thing. It would occasionally make me feel bad when someone wanted to disagree with Ben or Frod or Dana or Mathilda or any of the other characters I made up, and sometimes I couldn't keep track if I was arguing with myself or with one of the handful of people who would find the site and think it legitimate.

Ben was the hardest character because I know nothing about science. Frod was easy because I just used that staple joke over and over. TWITCH! It never gets old!

There's no Katie, of course. Nobody that insane could function in academe. The toughest thing about Katie was making up her "real" blog and post-dating hundreds of silly posts to make her seem real. What Katie did for me was allow me to do a more believable job of writing female characters on the page like Cassandra, Leslie K, and, of course, Fab. I was honest_prof, too, as I always thought was apparent. It was a part of my brain trying to reign something in, provide a counterpoint, provide a path to closing the website down, which was always, as you must know, the only goal I ever had.

Suzy, Bella, Academic Monkey, Proffie Galore, Richard Tingle, Wombat, Boston the Bitchy Bear. It was all me. There were never any other mods: no Cash, no Cricket, no Cal, no Chronic. They wrote to each other, even outside the business of the site. They had interactions. Sometimes they met in the real world with other characters I'd created. I sent Darla and Leslie K to a retreat somewhere. Darla had a baby. Leslie K had a surly daughter who got married. I was all of them, Darla, the baby, Les, the daughter, the shiftless new son-in-law. I was even the son-in-law's high school teacher from Columbus, the one with the mole. The world was something I half perceived and half created! Kimmie isn't a lesbian from Boston! She's not even a lesbian! And her name isn't Kimmie. She left, though, all the same, and took my daughter. She left behind a stuffed toy. It's all I have left.

I guess it just spiraled out of control. It was a swirl I couldn't extricate myself from. My waking and dream lives sort of collided. I taught my intro classes and then holed up in my office creating controversies and fights. One of the most onerous tasks was making those graphs showing millions of visits. Usually there'd only be 15 outside visits a month, but I'd make it into 335,129 or similar number. It's not actually very difficult, but I found it a pain making up the actual graphs, and I never quite understood which axis was X and which was Y and why did it matter. Here, for example is what the real graph looks like for the past six months: 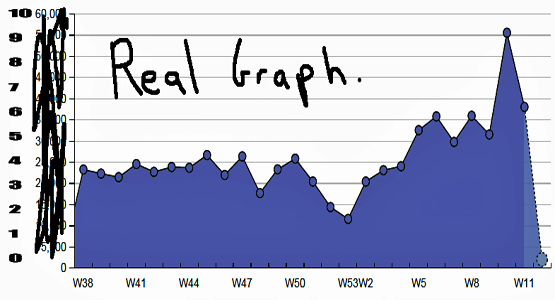 In February of last year I thought I'd give the whole thing one more try and started Academic Water Cooler and "gave" ownership of that new site to one of my many alter egos, Beaker Ben. I actually got a little traction there and a few people started to visit who were real academics. They often wrote to me - as Ben - and told me I was doing a better job than those "people" who used to run the other sites. That handed me a laugh, but at the same time it also cut me to the core. Were these real emails, or were they emails I was sending myself in some sort of overnight reverie? Was there any way out? Could I kill Ben? Could he kill me? Which would bring order to everything? Which would help me miss my little girl less?

It was during this time that the Beaker Ben Twitter account was started. And it wasn't me. Someone mentioned it on the page. It changed everything. Somehow this alter had taken his own shape and had begun to interact on the web on his own, separate from my own consciousness. Was he real? Was I not? I searched my school computer's browser history. It showed the account, and logins at strange hours. I felt sick, nauseous, as if the world reversed its spin somehow. I knew it was a signal that some kind of tragedy had engulfed me, the stuffed toy, the photos of my daughter, the letter Kimmie (Katie) wrote. A part of me was trying to hang on. I closed AWC and started TheCollegeMisery.com one last time about 6 months ago. I thought maybe I could put it all right. I could get them back.

For a short time I had some peace. It still amazed me that the few people who found the site thought it was real. In some comments you'd see 34 people posting and arguing. Usually it was me doing 95% of it. But I started feeling guilty when I'd finish a day feeling upset because Ogre Proctor Hep had insulted another "community member," until I realized it was me insulting myself.

And I always won "post of the week," every single time. And when I used to run ads I made hundreds of thousands of dollars from them. I never cashed the checks, though. That would have been wrong. There's no college called Weber State. We never had a compound. There wasn't any alpaca, except for a stuffed one. It was my daughter's before my wife took her away. I still have it. It's all I have, really.

Oh, and the duck was real. His name was Hiram and he lived in our pool. And then he died. 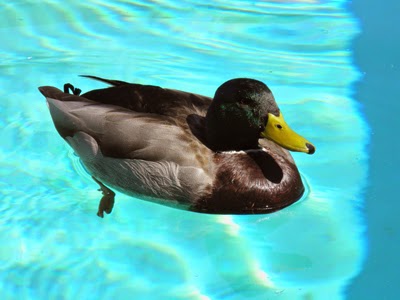 There was a sort of disconnect occurring. I spent more time in this fantasy world and not enough in the real one. My teaching disgusted me, and a bad post-tenure review showed me that I'd completely neglected my real job for this fake series of sites that were almost wholly populated by me and my madness. My daughter had a birthday 993 miles away. Her mother made her turn her phone off for 24 hours.

A few weeks ago, I created a fake Twitter feed and professional website for a "digital humanities" professor - whose name was the same as a boyhood friend - and it created the most "real" hits for the website ever (about 17 over a 2 week period), I finally realized that I'd gone too far. I created this buffoon and then tore into him with a dozen or more made up characters, and it all was too real. I wrote insane tweets, retweeted them, copied them, put them on the blog, reacted to them as other characters, became the alpha and reacted back. I ran an online chat where I argued with myself and my alters for 2 hours. I was angry and confused for days after.

The breaking was complete and I felt that I'd lost the entire plot of whatever my real life was. The truth was I had started dating a new woman at the college and I was finding myself unable to hold a pleasant conversation with her. I often would dive into my own thoughts trying to dream up a new controversy for the next day's page - even though I knew I was virtually the only person reading it.

It couldn't go on.

I have regrets. There are likely a few people who still read the page - I know for example that the Contemplative Cynic is real, and of course Walter. But I apologize to anyone who's been taken in by what has just been a goof that devolved into a pathology.

Here I am earlier this semester with my department, a group of hard working folks who I've been sort of lost to these past ten years. My new therapist, Dr. Jennifer, says that if I take the meds regularly that I should be able to reclaim much of what I once was, with 2-3 sessions a week and a complete break from the Internet. She says there's a chance that with care we can approach the judge about visitation and custody. I would give anything to see my little girl again. 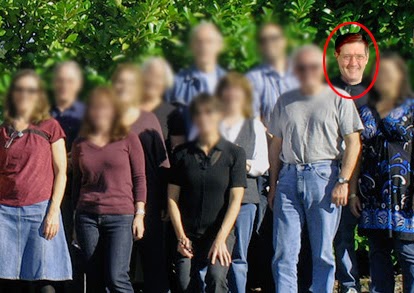 I am told that these steps are 1, 4, 8 & 9; if so, I'm glad. If anyone is still reading this, sorry. Are you there, Katie? If love is not madness, is it even love at all? Will rescue nothing of me the old remaining? Do you feel how heart my fast is beating?