Wensleydale, this is stupid stuff

Wensleydale, this is bullshit. You have it better than you think, certainly no worse than anybody else here, and whatever you perceive to be worse is surely your own damn fault. But you recognize none of this because you are always so very, very right. 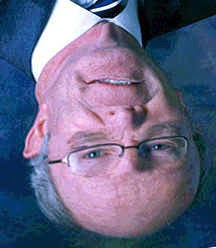 At lunch during my interview day here, one of the search committee pulled me aside to alert me not to be put off by your tendency towards officiousness. An hour later, in my private interview with you, I got to hear of your vast achievements and acts of academic derring-do -- it was actually the easiest interview that day, because I hardly had to say a word. When I was hired, I tried not to let that episode poison the well for future interactions, and I am still trying to give you the benefit of the doubt, fool that I may be.

In the nearly two decades since then, I have heard your litany and more at far too many faculty meetings. Your repeated appeals to the authority of your nine years as head of this or that back in the day grow less impressive when it's apparent that it was the same year's worth of experience, iterated nine times. (When you start perfect, there's no point in seeking to improve.) Other faculty had once taken turns telling you to just get to the point, with zero success: you continue by simply talking over everyone, often restarting whatever paragraph you were on. To try to move you along would only push the rock up the mountain and prolong cessation of its inevitable descent, so we've each developed strategies to cope. The more playful among us mime shooting themselves through their mouths; apropos that idea, I subtly raise my chin, then lower and raise my thumb on my imaginary vest's deadman detonator (it's the most humane thing I could think of). Other than that, we silently occupy ourselves with more productive pastimes, such as wondering whether our institutional internet filter would trap searches for explosives, as we await your bloviating bolt to be sped.

The last committee I volunteered to be on with you was the last committee I will ever volunteer to be on with you, especially if you have any role in its leadership. It was the straw that broke the camel's back, the bridge too far, the last stand, the Waterloo -- are we clear on this? I had signed on because I have extensive actual experience with the technical issues we were tackling, for all the good it did. You called meetings but deigned to attend only one in six, but nonetheless exercised your "mandate" to badger our colleagues by email in ways that not only misrepresented our goals, but also revealed your profound personal ignorance of the technical details. (I still can't believe you advised people that they must "install the Google" to access our intranet.) And of course, though you signed all the committee’s names to these emails, you never sought our input in crafting them. Embarrassment can only partly describe my reaction: each one that arrived in my inbox left another forehead-shaped dent in my office door and required an apology to poor Panquehue who would rush down the hall to my plaints of "Why? Why, whywhywhy the fuckety fucky fucking FUCK WHY?"

Your student evaluations consistently establish the bottom of the curve, and you dismiss them as worthless; I suppose on the latter point we might agree in its general case, even if merely in the way that two clocks occasionally agree when but one is running (and you don't get 'round much any more, do you?). If your students' performance in subsequent courses were good, I'd laud your evals as a badge of your rigor, but sadly, such is not the case. Still you brook no collegial insinuation that you might modernize your approach; we can again find agreement when you argue that advice from someone untrained in your field can be off base. How then can you not see the problem in your belief that any of us would appreciate the "insight" you have gained from your tribe of toady trainees, or that we'd want to be blindsided by your rendering of it in front of uninvolved parties? Seriously -- you haven't sat in on the classes you see fit to opine upon, and have you looked at the transcripts of the students you think so sage? I have: they are bottom-feeders, by definition non-experts in any subject we teach, much less experts in our subjects' pedagogy. Once their mewling has percolated through your cranium to spew from your cake hole, it is as useful as said cake having taken the reverse route to the opposite terminus.

Frustrating though all these behaviors may be, I can't just write you off, and neither can our colleagues. We still harbor affection for you and defend you, even as we try to avoid situations that bring out your less desirable qualities. Maybe it's something in the way we hire here that has assembled a group so willing to salvage whatever it can in each other. It could be that trait made manifest when we pronounce that one of the good things about you is that you have helped the rest of us to see the good in each other.