The Air Up Here 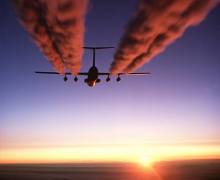 This one must really want to be the new deanlet. What else could account for this recent addition of business-speak to his lexicon? Maybe he's read a book called "Speak Like the Boss You Want To Be" or somesuch. I make a mental note to wish death upon the author, then ponder my own predilections, one of which is occasionally to quote a line from a movie. Right now, I'm thinking What we've got here is, failure to communicate.

"Are you asking how it's going?" I demur, trying not to reward his annoying new habit.

"In that case, it's going O.K. at the moment. A couple of hiccoughs, but we fixed them."

"Oh?" I widen my eyes, flash a sincere yet slightly sinister smile, and alter my voice to match. "Your work is just beginning. You have to carry the ball now." I make a sweeping motion with my hand. "All this we have here now, which is the way you wanted it, well, you get it."

I turn on my heel and beat an unhurried retreat to my office. It being too early for me to go home to drink, my unmedicated brain cannot avoid rehashing the events that got us here.

The Really Big Project was going to revolutionize pedagogy in our program. It would be a masterful combination of large group instruction (i.e., lecture), small group sessions, assessments, wikis, discussion boards, etc. -- all the latest shiny things. Emails went out addressed not only to faculty who were already involved, but also to those who might do similar things in the future, heralding a first meeting to explain The Project and to map out all the moving parts. It had nothing to do with me, so I skipped that meeting.

The next wave of emails contained links to YooToob videos that explained the technologies. I thought, what the hell? and gave in to it for a few minutes while I huffed down a sandwich at my desk. So when it was announced in the third wave of emails that a company representative would be on campus to give a live demonstration of one of the technologies, I attended.

The day after that, Panquehue came into my office and sat in the chair normally occupied by wide-eyed students during my Come to Jesus conversations.

"So," Panquehue began. "So. You're part of this Really Big Project now?"

"Well, I've only been to just the one demo, which you were at, too. But part of it? I don't think so. It's neat stuff, but I'm not thinking of using any of it till next semester at the earliest."

"Here's the thing. They're using it in the other section of my course."

"It looks like I have to. They're running with this thing. It has been written from on high, announced, publicized -- I can't walk away from it! I'd look like an idiot!"

"You said they're running with it. But you were part of the mapping from the start, right?"

"No! They kept postponing the meeting till I was finally away on vacation!"

"I shit you not. Could you please come to the next meeting? I'm not sure anybody else really knows what's going on."

And so I did. Limburger was in his finest form, hailing his having planned out the whole thing, with only the briefest recognition given the other members of his inner circle. Then came time to explain the plan.

"Panquehue will be Ogre's second in the event that Ogre is unable to fulfil his duties," he declared.

"Panquehue?" I quavered, afraid of the answer to my next question. "Were you aware of this?"

"No, I was not," deadpanned Panquehue.

"Nor was I. So, then, I take it that it might not be too much of a stretch for me to infer that you are also unaware as to any specifics of the duties that I might be unable to fulfil?"

"In which case I feel kind of in the dark here. Limburger, may I please see that list of duties you're holding?"

"Ah, uh," Limburger stammered, "it's not quite final yet."

"Humor me." I gently snatched the paper from his insufficient grasp, scanned it once quickly, then flipped it over several times, to be sure my eyes were not deceiving me. "This is just a list of names. There's more, right?"

But so deep was my cringe that I didn't hear the rest. I recall resting my forehead against the whiteboard while looking down, spying a marker in the tray, picking it up, and uncapping it.

"O.K." I said to the gathering. "Let's figure this out." And so we did. My colleagues rose to the occasion brilliantly; I could hardly move my hand quickly enough to record all their ideas. After the meeting adjourned, Panquhue stayed behind to help me transcribe the scheme, which we then distributed to our colleagues.

Then came The Big Day. Everyone was in their assigned place. Everything went off with only the most minor of glitches. Though my role in the event itself was minor, as I sipped my evening single-malt I allowed myself to feel some satisfaction alongside my relief, which too soon became exhaustion.

Limburger magnanimously accepted the Dean's praise for the entire thing, but that didn't bother me in the slightest. How could it, since I'd already handed the whole thing back to him?

A few months later, the emails showed up in my inbox again. "Building on the success of the Really Big Project," they began. I deleted them, mostly unread.

A few colleagues inquired if I would be helping to stage The Really Big Project Two Point Zero. "Well, I usually have a society meeting around that time of year," I equivocated.

Through the window of a passenger jet cruising in excess of thirty thousand feet somewhere above the parched Midwest U.S., I see ominous billows below. The smoke dissipates before it can commingle with the cabin air, and I am denied sense beyond my sight. Are these puffs just the normal manifestation of industry? Brushfires? Houses burning to their foundations? My interest cannot transcend the academic, and I am surprised by the detachment I feel from these events that are very real to the real people below.

Back home, fires of another kind may be burning; I am quite detached from them, too. I wonder if my need to distance myself from those fires has spilled into other areas of my psyche. What have I become? Am I so above it all? So unfeeling, so uncaring? Have I given my last fuck? Will I give a fuck ever again?

Cloud cover blocks my view of the terrain. The greyness of the vista becomes uninteresting, and I return to my book.