Did Terry P. Kill the Misery?

But the page's woes got me thinking about what exactly happened. There's a line in Compound Cal's 2010 article in the Chronicle about RYS getting 400,000 page views a month at the end.

Over the past few months the traffic has been steady around 50,000 page views a month. That's obviously a much smaller audience.

Of course this page went dark between Feb 2014 and September 2014. During that time the pageviews averaged about 10,000 a month, for a page with no new material.

The Stommel kefuffle - which is a whole other matter, because if this page's biggest numbers come about because of a minor skirmish with such an unimportant fringe academic, then there REALLY are bigger problems than even what I'm talking about - boosted us above 150,000 for the month.

Then March 18th. As a precursor to the yearly April Fool's Day thing, Terry P. put an April 1st countdown clock up, and then on March 18th dropped The Mediocre Reveal, a remarkable piece that several veterans of this war (Ben, Cal, Hiram, Kimmie) thought was the "best" thing ever posted on the page!

It was nutty, obviously. The conceit of the entire page being written by one poor schmoe all these years played into so many of the various conspiracy theories surrounding RYS and CM over the past 10 years. So many big personalities from our history got namechecked in it that it was clearly a clever easter egg and nod to the page's readers.

But mail came in quickly because the post DID say the page was over "once again," yeah, for the 2nd time, relax Turbo. And Terry P. did send me conflicting messages because I did NOT know he actually had planned to leave the post up as the last entry and really DID intend to stop modding the page. But within 12 hours I got my butt off the wicker patio furniture and got things going again. (Terry P. has since made amends for all this. He was having a bit of a crisis at the time, and some of that apparently spilled over into the world of being the only person working on the page.)

And the page never came back. Our readeship nosedived after that, daily, weekly, monthly, etc. It rallied a bit after the normal summer doldrums, but it is not what it once was at ANY time in the 10 year history of RYS / CM. 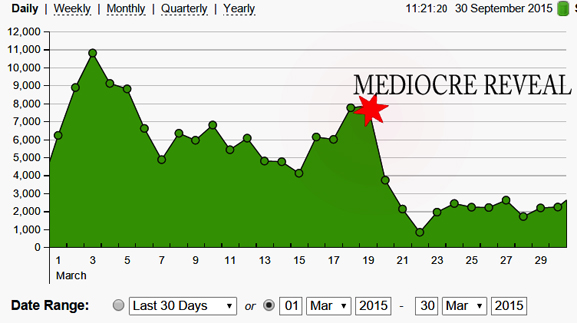 Was it all too much? Was it bad timing? Did the nuttiness go over the line? Were people ready to check out anyway from the blog fatigue that Ben had mentioned earlier this year? Did Terry P. kill the misery? Or is it really dying this time, for, like, real?

I wanted to note that I chatted with Terry P. about this post during the writing of it over the past couple of days.