Joseph Heller May Have Spent Some Time In Academia 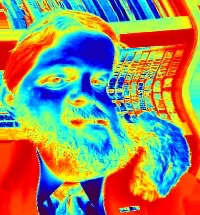 Apparently the campaign against leaving computer equipment on -- because it will overheat in the cabinets which are necessary because the equipment gets stolen if it's left out, but locked with a $2 Home Despot latch you could probably pick with a paper clip, if anyone but me and action heroes still used paper clips, and apparently putting holes in the cabinets is expensive which is why all the cords go through just one hole, in a mass slightly smaller than an old trans-Atlantic cable -- is working, because the computer is hardly ever on when I need it for class. (I powerpoint some, but also need to throw administrative stuff up regularly)

Which wouldn't be a problem if... the start-up process didn't take as long as the transition time between classes. I don't like to rush the room, so I don't dash in at 10 til the hour; that's only fair. By the time the computer boots up, I log in (because without the log in we wouldn't have access to our cloud drives, because some people apparently can't remember to carry thumb drives on a regular basis), Windows puts some useful icons on the screen, the browser loads the university home page, and I log in to the LMS -- pausing to start the projector, whose bulbs apparently cost more than my car is still worth -- well, at this point we're minutes into a class where I have to cover 3 years per minute, on average, to keep up. What's a decade or two?

OK, I timed it: From power on to LMS useability, if I'm doing nothing else but sitting at the computer, is 4 minutes 30 seconds. Technically, I'm wrong: it is possible. It still seems unnecessarily absurd.