Somehow we at Large Urban Community College have made it through the first week of classes. This time of 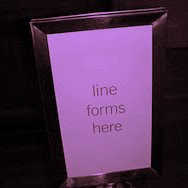 year is always more stressful for us than at most unis because we must take all comers and do so until the last possible minute (even though we know late registrants very frequently end up dropping or failing, our administration loves to take their money). But this term was particularly fucktastic because of the man-made registration disaster. You see, for years we've all been promised we were going to get this fabulous new system. It would do everything we ever wanted and accomplish some things so great we couldn't even conceive of them. It would even slice, dice, and make julienne fries if we asked it to.

The powers that be rushed the system through. The training we received was atrocious, and much of it took place during the summer when most faculty and advisors are either gone or teaching loads up to the gills trying to make up for the fact that there will be no raises again this year and our insurance is going up. No backup system was planned. Things we used to be able to do with ease on the spot now have to be done by some nameless, faceless person in central administration, often hours or days later.

Monday morning looked like a war zone. Students were in line at every department, both student services and academic, by the hundreds. The system had dropped them even though they'd paid. Their test scores said they could register for Course X, but when they tried, Course Z was the only one they could register for because they'd been locked out of Course X. They were now registered for two different math courses and supposedly owed money because even though they dropped one, the system was billing them for two. Financial aid didn't get registered for some students even though they had award letters, so they were dropped. People who needed a course to graduate were kicked out without explanation, and all sections of that course were now full. Students were literally sobbing in the halls as they watched the schedules they'd carefully crafted around work schedules and prereqs collapse into one class at 6:30 a.m. and another at 7:00 p.m.

And then the system crashed. Courses that were supposed to be capped at 30 turned up the next day with 45 because no one could see how many people were really enrolled, so they kept sending manual overrides to central administration. Courses that were canceled because of low enrollment had to be reopened to accommodate all the extra students. Some faculty had their schedules change five times over the past five days. Sometimes two instructors would show up in the same room thinking a class was theirs. Other times a class full of students waited for an instructor who never showed because no one knew who was supposed to be teaching it. Students wandered the halls aimlessly as their new classes were listed as in TBA room with TBA instructor.

And who is responsible for this? At first, it was mostly the students, of course. They just didn't pay attention to what they were supposed to be registering for or when they were supposed to pay. Then after faculty and staff pointed out all the things that went wrong that couldn't possibly have been students' fault, we got the official answer: No one. These things "are to be expected with a new system." We have "a learning curve." One person made "a tiny programming mistake." We'll do better next time. I'm sure we will because experience is the harshest teacher of all.