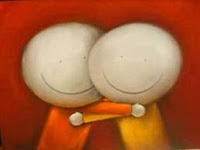 A student hugged me today...
A little backstory is needed:
A few weeks ago, said student (we'll call him Huggy Harry) completely bombed a speech. The way he acted, I believed that he didn't take it seriously; I even asked HH if he thought the class was a joke. Beyond that, HH committed one of my big No-nos. I had made it incredibly clear that they weren't supposed to do X, and he did it several times in the speech. How did I know it was incredibly clear? When HH did it (the first time anyway) there was an AUDIBLE gasp in the classroom. When he was done, I heard a student say to the person sitting next to him, "REALLY?" After class I read him the riot act. I think he was about to cry once I was done. And obviously, he failed the speech.
Back to today:
I was passing back the next speech, and he picked his up. He hung around as I finished returning work to other students. This isn't unusual and two other students stayed back to ask questions. After everyone else left, I asked HH what he needed, since he was closest to me, as I was writing myself a reminder note for the next class. As I turned to face him, he enveloped me in a hug (he's quite a bit larger than me). I pulled back immediately (and was very happy that there were two other students, one male and one female, still there) and asked why he was hugging me. He pointed to his paper and said "You gave me an A!"
Sirens and red flashing lights went off. I explained:
No, I didn't give him anything. He had earned it (and he had; obviously I scared the shit out of him the first time, because the next speech was much better and he seemed to take it much more seriously). I pointed out where he improved, and where he still had room for improvement, then directed him to the door so I could speak with the other students who were waiting.
Has this happened to anyone else? I imagine the fact that I am a woman and younger had something to do with it, but this is the first time I've been hugged...