It Is I, Yaro, To Discuss the Value of Air. 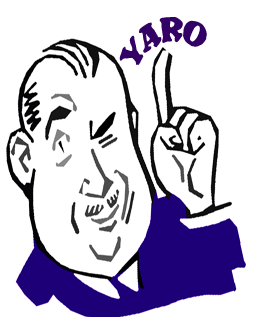 I teach in a place, where the mouthbreathers used to take a beating, where my livelier charges would find opportunities to rally the assemblage.

I can remember a long ago term where a particularly splendid student offered himself up to a desultory fellow sophomore as a tutor. This offer was taken up, much to my surprise, and the two of them became quite a team, the mouthbreather raising his own grade to something like passing, and my better student developing his own love for the lectern.

What has gotten me off on that particular story today is a session I've just come from, a particularly tedious opening to class where my students's only addition to the proceedings had been carbon dioxide. (I would have used the appropriate chemical "notation," alas, I, Yaro, am a humanist, and, according to "Jim" and others, likely a pillock.)

Anyway, back to my tale. The mouthbreathers won me over for several minutes today. Despite the grand weather I'd not opened the windows at the start of my class - as is my wont - but I found myself staring out there anyway, into a sweeping quad and several collections of young people.

To be clear, I had asked a question, an essential one. This is my method. I don't take credit for developing it, for surely the ancient Greeks are somewhat more experienced in the matter than myself, but it is - nonetheless - what I, Yaro, use.

So I had asked a question - not necessarily clever or cute or tricky. Just a question that was one step along a long corridor to some answers that I knew would unlock my students from where they sat now to an elevated place from which to take on their next commission.

And the silence. Of course, the silence. In fact, Ms. Keef has touched on these matters earlier. (And I must confess how delighted I was to learn that the odd "sausage" line was not profane at all, but a clever turn that I, Yaro, could use in mixed company.)

I am sorry, I've gotten away from it again.

The silence. It was thick. It made me tired. So I stood, went to the windows, and opened them. And the American Whitman came to me - as if in one of the gusts themselves: "Unscrew the locks from the doors! / Unscrew the doors themselves from their jambs!"

And it made me so giddy that I chuckled.

Now, my students know that I have a savage humor, one that is strong but - admittedly - a little odd, so there was no particular notion among them why I had chuckled, at what or whom. Perhaps old Yaro had flipped his wig, was what I thought they might be contemplating.

But the wind blew in, and it filled me with something and I turned to them, these normally delightful young people, and I said, "My question, mes amis. My question still stands. It's still hanging, as it were, in the air. But I'm going to give you 7 minutes. 7 minutes to ease your way down the hallway and out into this wondrous day. Do not make a fuss, for God's sake, do not make a fuss. No clatter, no tweeting, in fact leave your materials, your devices, leave it all here. But take yourselves out into this day. You have my question, don't you? In fact can't you still feel it? It's all over this room. It's the very same that I uttered those minutes ago, the one that drove me out of my chair and to these windows. I see it now, people. I see that the air outside is waiting, that is ripe, that is enlivened. So, go to it. No backpacks, please, this is not an escape nor a dismissal. But go out there. 7 minutes as I say, and then a return. And I will expect this fine day and its pleasures will motivate you. I trust that la petite brise will bring your tired brains the necessary launch to bring this all into focus, to help us find the answer."

Certainly you know what happened next. Of course they scattered. Their eyes were flashing, their smiles were wide. It brought me an insane pleasure to watch them transform. Good to my word, I stayed behind and I, Yaro, was standing at the very same windows when I saw them explode out into the quad. They stood perplexed for a moment, and then - slowly, seemingly inexorably - began to move toward my open window.

"Professor," one of them said. "You were asking us about the transition from having an idea, and how that 'idea' must somehow transform to something like 'claim' in order to be suitable for academic discourse. Is that correct? I mean to say, I believe that was where your question had us headed."

And I was delighted. I nodded, there inside the classroom, now jauntily resting a newly bare arm on the edge of the sill as the whole class gathered around the open pane.

"Indeed," I said. "That is an excellent first step."

Dr. Whitson, a rather unpleasant Sociologist I know - although I want to stress that Whitson is not unpleasant in any way that has to do with his discipline. I almost married a Sociologist, years ago, right out of the Academy, a lovely woman, and a much better Sociologist than Whitson ever dreamed of being, he with his hollow leg and even more hollow good sense. But Dr. Whitson went by and saw our odd grouping. When he tilted his blockhead toward us to catch the flavor of the dialogue, my student Abernathy was making great hay out of a point concerning an essay we'd read in class that at first had received some reproval from us for its simplicity, but now he, Abernathy, noted how elegant the promise of that essay's introduction had been.

Anyway, the details of Abernathy's eureka is not important.

7 minutes, almost to the jot, another student said, "Professor, is that our time? I mean to say, it appears that we've exhausted the period you've assigned us."

"Splendid," I said. "The time has flown. And I'm pleased with the effort. Come on back, retrieve your materials, your electronics, and we'll pick this up anon."

To be sure, I am not a deluded donkey. I know where milk and meat come from, and I'm not a Romantic when it comes to the occasional goodwill from a student on a brief hot streak. But I smiled big at them all as they left class.

"Remember this," I thought to myself. "Make sure they get a little air."

I take my leave of all of you, and remain your friend,
Yaro