Luther from Louisiana on How It Could Have Been.

I was really moved by My Little Proffie's recent posting, and wanted to reply more fully than a comment would allow. 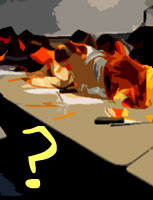 I've had a long, stumbling career, moving often, and count 7 institutions on my vita. I've let fear control a lot of what I did in the classroom, always trying to hang on to a job, get better classes, get better times, please my students or my bosses, or simply work my way toward tenure without upsetting the apple cart.

It meant that I ate shit a lot of the time, and did it so well and for so long I completely forgot that I was doing it. (To be fair I had a large family to raise, ailing parents, troubled siblings who had legal problems for years, so I was often so busy in my regular life that my career rested on auto-pilot.)

I had a similar realization to MLP's many years ago when I, too, decided to leave a college and head elsewhere. I did what I thought was right that last semester, and it made a world of difference. I treated my students as if they were adults - the first time. And for the most part they became adults in my class. I was fair but strict in all of my actions; I tried to teach like the great proffies of my own undergrad career had taught me. (By great, I don't mean the ones I liked the most, but the ones who I still remember to this day as having made me a better student and human.)

I felt good about my career, something that had been missing ever since the glow

of that first t-t job had worn off. Instead of tiptoeing through the department, I took great strides. When a bully tried to push a new textbook everybody hated into the curriculum, I tossed my copy into a bin and said, "That book is bullshit. I don't know why you don't see it, or why nobody else will speak up about it."

I felt as if I was being true to what I believed and what I knew mattered to the students of my college.

It changed my life.

When I ended up in my next position, the superkeen department head ended up being a tyrannical mess who needed tiptoeing and kowtowing on a daily basis. I received endless warnings about fragile and precious students, my "harsh" grading, my brusque manner.

And within a semester all of the good feeling I had by trying to do what I believed to be right was gone. I stumbled that way until tenure, and by then I had become what I am now, an aging and rather doddering old proffie on the very tail end of a career that I don't care to look back on much.

I've saved some money. My wife has done the same. We're looking forward to getting out of our careers and onto a sort of quasi-retirement. But reading this page (and also RYS) over the past few years has made me think about our profession, how we do it, what we must do to survive in it. I think we are often asked to give too much.

I also think of that one grand semester when I had no fear, and I wish I had not squandered so much time.