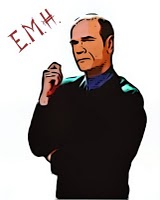 I don't know how much more of this I can take.  Frankly I just can't stand the bullshit anymore.  Having Asperger's and sociophobia doesn't help the situation either.
About a year ago, when I decided to leave California, I thought I would be leaving the educational arena for good.  One place had decided to let me go, and the other place resorted to a series of hostile evaluations until I finally decided to leave.  The institution where I had resigned also invited me to "return in 2013 when the economy is better."  After getting a stellar letter of recommendation from my Dean, I'm still not sure how to interpret things.  And again, I never involved my Star-Trek appreciation at either institution.
But then I landed this other teaching job after I moved.  I guess I just didn't get enough of the punishment the first two times.  Being too depressed and discouraged to search for a real job, I had resorted to selling arts & crafts at the flea-market.  Nobody purchased a thing.  I didn't even bother to search for a non-teaching job.  I mean the only options would have been McDonald's, the grocery store, or Ace Hardware.  Yeah, disaster waiting to happen.  I did McDonald's for a period of my life, but I can tell you that my skin crawls every time I think of having a manager shout at me for being too slow, or every time a customer demands something for free because they forgot to order it, or for ordering the sandwich and getting pissed because they forgot to mention that they wanted the value-meal (the same one's get pissed when you speak-up and ask them if they want the meal...).  And then they plead their case in front of a manager in order to have the manager loudly reprimand the employee in front of the customers.  I remember when I thought our society was civilized.
I do not think I am a nightmare teacher.  I just have eccentric ways of doing things.

I can tell you that when I worked for the golden arches, I thought that our managers were straight-up Looney Toons.  I wanted to believe that it was just the people they picked for the job, but apparently these guys are manufactured in a factory somewhere just specifically for McDonald's.  I can't go back.  I would rather go homeless.  If I had to do fast-food again, the swat team would probably have to be involved.
I never told any of my colleagues or students about my problems with Asperger's and sociophobia.  However, some of them picked up on it.  One student approached me after class with concerns that she felt I had PPD, since her son has it so that makes her an expert.  Another student approached me to tell me that she noticed that the students treat me terribly and that it's because I am "different".  I thought, wtf?!  And then she invited me to her church...  Now, just last month a student of mine approached me to share with me that her son was recently diagnosed with Asperger's and that she was doing a PowerPoint presentation on it for one of her other classes.  This also makes her an expert on it, as she pointed out that I have the symptoms.  Well, our class met again and she starts calling me things like "sport" and "sparky", rather than Prof. EMH.
Then there's the smart-ass colleague who went to graduate school with me and grade-grubbed the entire time.  This guy thinks that just because he carries a Bible around and smacked me with it, that I am the only person in the world who is not allowed to get angry.  He always tried to encourage me to befriend my instructors, take them out for coffee, but could not ever understand why that offended me.  When he was still an undergrad, he scored high on the Putnam Exam.  Consequently, he was loved by everyone and got whatever he wanted on a silver platter.  I remember his comments he made about the Master's Exam:  "Ya know, the Analysis Exam was pretty easy.  But the Abstract Algebra one?  I don't know, I just sorta wrote down a bunch of stuff that seemed true and I'm praying for the best."  He passed both tests the first try.  Then he went on to a Ph.D. program and flunked out of it when he found out that he couldn't make friends with his teachers.  Perhaps he would like to keep the integrity out of his Christianity.  But then that would be like removing all the blood from an organism.

So, here I am, another semester under my belt and wondering if there is even a little hope out there.  I am scheduled to teach for summer and fall, but I don't want to go back.  After having so many bad experiences with working with others, I am hoping for some kind of job that has minimal interaction with people.  A hologram can dream, but hopefully I can get some kind of data-entry job.  Sorry, but so far my experience with people is that they do nothing but nasty things to me and are all-around just not safe to be around.  If they can get you fired for not "hooking them up with fries and soda" (even though you will be fired for stealing) or for not doing their homework (they tell the administrator that their learning style is not compatible with yours), or if you accidentally let the word "Bible" slip out of your mouth in the tutoring-center and then some guy gets up and leaves glaring at you on his way out only to return five minutes later with an administrator who is "concerned about a safe environment" then I say that a safe work environment for MYSELF is long over-due.