Gerry in Georgia Sends In Some Flava: "I'm Asleep by 9 Every Night. But if Midnight Students are 'Awake, Alive, and Vibrant,' Then Sign Me Up!" 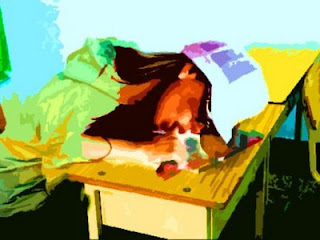 Colleges start offering 'midnight classes' for offbeat needs
By Greg Toppo, USA TODAY
It's midnight. Do you know where your students are?
Well, they're in class.
A handful of colleges across the USA are offering "midnight classes" that cater to the schedules of students with children, inflexible jobs or just a yen to stay up all night. On overburdened campuses, the late-late classes have the chance to use space that's booked during conventional hours.
"They would rather do anything than turn students away," says Norma Kent of the American Association of Community Colleges. "If you've got faculty that's willing to teach at an unconventional hour, then it's a solution for a lot of things."
The idea took shape in 2009 at an overcrowded Bunker Hill Community College in Boston, where an instructor volunteered to teach a class at midnight, just about the only time when classrooms weren't in use. The college's facilities, built to accommodate 2,500 students, struggle to make room for 13,000 enrollees.
"We found out there are many more folks than we'd imagined in the Boston area who are working third shifts," Bunker Hill President Mary Fifield says. "It's a population that we didn't know existed."
The school this year offers five midnight courses.
Goodie calls her Intro to Psychology class "Insomniac Institute." It meets weekly this semester from 12:01 a.m. to 2:55 a.m. She says two kinds of students take the class: those, like her, who are up late anyway and those who mistakenly thought they were signing up for a noon class.
A self-described insomniac, Goodie says she keeps the class active and engaging, telling jokes and getting students on their feet for presentations. By 2:30 a.m. most weeks, she says, "everyone is pretty miserable." But for most of the class period, it's exciting. "They're awake and they're alive," she says, "and they're very vibrant."