How Not to Run A Campus Visit

The recent post about search committees brought up something that I have thought about writing for my professional organization’s monthly publication (not the Chronicle since it’s not widely read in my discipline). I always thought that I’d want to write about how to not to run a campus visit. If you recognize me from my tales please don’t out me and I won’t out you. OK? 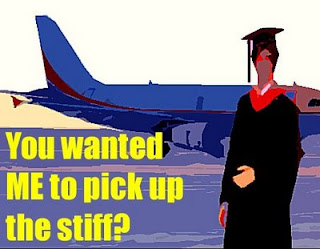 Rule 1: It’s not the candidate’s fault that the flight was delayed. Don’t plan a cross department dinner for an hour after the flight is scheduled to get in.

Rule 3: Respect time zones. If you happen to live on the Atlantic and you fly someone in from the Pacific don’t drop the candidate off at 10PM and expect that a 7AM pick-up will result in a well-rested and ready to perform candidate. For those of you who can’t do the math, the candidate will likely have to get up at 6AM which will be 3AM body time. If you can’t figure that out you don’t deserve the least qualified candidate in your stack. A similar rule is true if the coasts are switched.

Rule 4: Pay attention when you are driving. You don’t want your candidate to be late because you were in an accident.

Rule 5: If you are in an accident, leave a note. No one really wants to work with a dishonest colleague.

Rule 6: Arrange for some sort of fruit basket or snack to be in the hotel room. An apple costs like 50 cents and could save you candidate from a hunger headache in the night.

Rule 7: Send your candidate a rough schedule ahead of time so that he or she can plan for his or her needs.

Rule 8: Leave several small gaps in the schedule which could serve as bathroom breaks or stretch breaks.

Rule 9: Don’t schedule a 1 hour meeting with HR just because you don’t want to entertain the candidate while you all teach. There is only about 30 minutes of stuff that HR has to say.

Rule 10: Don’t use your candidate to push your agenda with the president/provost/dean.

Rule 11: Feed your candidate at times similar to when they might eat in their time zone or at least provide a snack near those times.

Rule 12: Put your candidate up in a decent hotel. It doesn’t have to be the Ritz but it shouldn’t be a Super 8 (unless that’s the nicest hotel in town).

Rule 13: If the hotel you choose doesn’t have a continental breakfast be sure to feed your candidate before the day begins.

Rule 14: Don’t leave your candidate alone with that creepy colleague.

Rule 15: Small talk is fine but don’t let your candidate in on all the sordid details of your life/family.

Rule 16: Don’t converse about things at dinner that the candidate has no way of contributing to. Talking about your colleague over in carpet weaving would be an example of this.

Rule 18: We all like going to hip, local restaurants on special occasions. But make sure you know where the restaurant is and you’ve made sure their menu has at least a few “normal” food options. After all, blue cheese crusted sheep’s testicles aren’t up everyone’s alley.

Rule 19: Don’t drink at dinner. Most candidates are advised not to by the infamous “they”. Don’t make your candidate feel pressured to drink or uncomfortable not drinking when the rest of the table is.

Any others I’m leaving out?