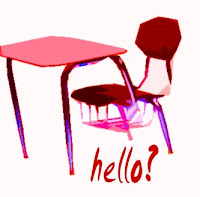 The first writing assignment of the year has shattered all my remaning illusions about the intelligence of my froshflakes. Even after an informal poll conducted in class last week revealed that over 90% of them think reality tv is "real", I held out some faint hope that they couldn't be *that* stupid.

The (imposed) draft/comment/re-write/repeat structure of this particular assignment has meant that for days now, I've had to don a Hazmat suit to open my academic inbox. Even with judicious pasting of particular repeating comments, limiting exposure to two one-hour blocks a day, and a polite and firmly stated refusal to engage with any draft that doesn't follow the instructions, I have a wicked case of radiation poisoning, caused by exposure to a toxic soup of stupid, obliviousness, apathy, and entitlement.
Since it would be unwise to bitch on Facebook, I have other deadlines to meet that preclude self-medicating or hibernating, and laughter is a powerful antidote, would anyone care to join me in compiling a list of snowflake axioms?
When it comes to snowflake epistemology, what propositions do you consider to be self-evident?
To get the ball rolling, I submit:
My willingness to help you is directly proportional to your ability to spell my name correctly.
Thanks in advance for sharing the misery.
drunk in a midnight choir.
*Except for the 8% who can apply critical thinking skills to what they see on TV. Shockingly, they are the same students who can also apply critical thinking skills to the politics and praxis of hamster fur weaving.