The Day I Met Yaro. 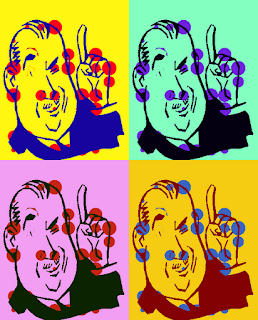 My brother recently moved to a new city, and when a minor car wreck left him with a couple of  cracked ribs, I took my turn among family members and visited him for a few days. The small city is also home to the college where a certain CM community member lives. You might know his name. Yaro.

In my preparations for the trip I contacted Yaro by email and asked him if he could spare some time to meet me. He was open to it and later that day we talked by phone and set a day and time.

I arrived at his pleasant and small campus on an awful, windy, rain-spitting day. Students smiled at me as I walked unfamiliarly around a maze of older stone buildings. But when I found Yaro's, I was surprised that it was the one brand new building on campus, steel and glass and more like an office complex than anything else.

I went in through a lobby (with a coffee shop!), and up one flight of stairs. In the middle of the long hallway I found his door. I knocked.

He doesn't look like exactly like the Yaro in his avatar, though the hairline is about right. He looks younger than his years. But he wore a requisite professor's uniform, a wool jacket (no elbow patches), but tiny threads showing at the sleeve, and dark wool trousers. He's got the crow's feet and laugh lines of a life well lived. He looks like he could be played in a movie by a pudgier Christopher Plummer.

He shook my hand with his and then put the other on my shoulder to pull me in to his office, which already overflowed with pre-retirement boxes. Three books (non discipline related) that I saw in a box at my feet were bios of Edison and Chaplin, and a large coffee table book about Spanish architecture.

We talked for about an hour about the blog. He loves it, although at times he says he's "discomfited" by the profanity and the more "extreme reactions." Even those he waves off as a minor matter. He sounds like Yaro-lite in his speech. The sentences are formed in whole, rolled off as if they'd been written earlier and prepared, but the ease of his delivery is relaxing. (The only accent is sort of Midwestern anchor man.)

I asked about the Yaro persona, and he told me that Yaro is a combination of him and some of his favorite professors from his own grad school days. He did his graduate work both in the US and France, and he remains fluent in French though he only visits every four or five years or so.

There was a Mrs. Yaro photo on his desk which he showed me. "She's meeting me in a while for lunch" he said. "She thinks my involvement with your blog is a singularly silly venture, but she's quite fond of how she's portrayed."

I asked him about how much of his real life is in the Yaro posts, and he seemed momentarily disarmed. "All of it is real," he said. "Perhaps one might change a detail here and there, in the manner, but it's a record of how I feel about our profession, our students, our responsibility to it all. I assume the same of all of the other correspondents. It is all serious matter, how we teach, how we mentor."

He's embarrassed at times at the adoration he gets through emails forwarded by moderators and through some of the comments on his posts. "I am grateful, I must tell you that, endlessly grateful that it is enjoyed, but I am much more modest about their additions to your website than others sometimes say. Do you think," he said, tipping his head, "that there's not a bit of gentle mockery in it? Am I not the antithesis of the modern professor, a bit outdated for the times?"

It is the students he will miss the most. He talked for a while about his current group, and twice during the time I was there a student popped in. They called him by his first name, and one of them brought a revised essay with its early draft. I asked to see it, but Yaro winked at the student and said, "Let us let our failures and victories be between the two of us."

"The string is nearly unwound," Yaro said, when I asked him about this last semester of his. "I have days where the inevitable is as welcome as a kiss, and others when I feel socked in the jaw. But there are many adventures left, and I believe I've done all that I've endeavored to do here. We have a fine group of younger faculty who have kindly welcomed me in to their lives. And aside from a worsening adjunct crisis, I believe our administrators are doing the best they can for everyone who calls this home. It is not perfect, but my own protestations have only half the weight of someone with a longer future here. I leave it to the new guard to fight the good fight. It is a fight, of course, as your website often reveals, here, where you teach, all over the country. I only hope that Beaker Ben and the rest can solve it." His eyes sparkled. "That Beaker Ben is a wiseacre."

I asked him if there were more posts to follow from him. "I may have one more in me, but I truly don't know. Each time I simply wrote when I wanted to share something. And now my head is so full of this new world, I feel as if an old part of me, of Yaro, has exited. I am already outside the academy." He shrugged, his hands opening flat in front of him.

"Do you see this timepiece?" he said, unclasping a heavy silver watch from his arm. He passed it to me. It was nothing short of magnificent. "I never spent a day in my father's shop after I was eighteen. It was a disappointment. My papa never fully forgave me. And now I have surpassed his age. Those," he said, showing me turn the watch over, "those are his initials. The same as mine of course. The same as..."

It was quiet save the metallic click of the second hand.

"The secret to winding a mechanical watch is to wind it only once a day, to let it run its course, the 'range of motion,' they say. Too many people wind them constantly. Fear, they might say. Caution. But the mainspring is not designed for that. The watch will fail." I handed the watch back to him. He clasped it back on his arm.

"It never loses or gains a minute," he said. "I place it on the bedstand before sleeping, wind it each morning. It will outlast me and everyone I know."

Too soon it was over. We finished with him asking me several questions about my own teaching and my work on the blog. He asked about my family, told me that's where he always went when the career was taxing. He walked me out of the building, easily throwing an arm over my shoulder at our goodbye.

"There she is," he said, suddenly, pointing to an approaching woman bundled in a red coat coming up the sidewalk behind me. "She is the wheel to my barrow."

He smiled at my leave, and I was twenty paces away, headed back to my car, when I turned to see Yaro kiss his lunch date full on the lips.