Listen, I've just had three bottles of Orange Crush. Do you feel me? In glass bottles. My supermarket sells them that way and they are, like, the greatest tasting soda pops I've ever had. When I drink them I get a little high, a little more truthful. There is an ingredient in them that brings me a level of clarity, and I have chased them down because I need to open up this window to the loyal readers of CM.

Oh, I didn't introduce myself. I'm the RGM. That's Real Goddamned Moderator, no matter how many clever-tons try to reverse engineer it to Real Goon Moderator in their hysterical emails. (No, stop, my ribs are tickling.)

I've collected some recent email that I'll now share with you, in the manner: 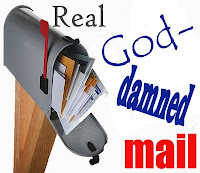 All right, I've switched from Orange Crush to Fisherman's Wharf. Its effect is different. It's slowing me down, bringing on the self-loathing. I make Nixon look like a piker. Self doubt is swamping me. I'm unsure. Do I dare eat a peach?

But, the notes above are some that have come in recently about my heavy handed moderation. Please, if you'd like, bat some ideas around below. Or if that doesn't interest you, you may look at this duck: