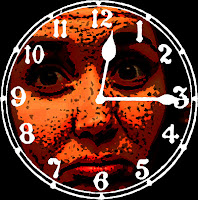 This one isn't even mildly funny, for which I apologize, but it is something to be aware of (perhaps especially for those of us  in positions that are at least incrementally more secure than those of by-the-course contingents).

In a nutshell: in a number of states, colleges and universities (public, private, and even, in at least one case I've heard of, church-sponsored) are restricting the number of classes adjuncts can teach, and/or underestimating the hours involved in teaching a class to a ridiculous extent (1 hour for prep/grading/email/everything else for each hour in the classroom!?!), in order to ensure that said adjuncts' duties can not be construed as including 30 hours or more a week of work, which would make them eligible for health insurance under the Affordable Care Act.

Guidelines are apparently still being written (the IRS held hearings last week),  but there's a built-in Catch-22: if adjunct faculty acknowledge how hard they actually work, they will find themselves with less work (or the same amount of work spread over more schools) next fall.   In some places -- e.g. ones where many adjuncts have worked both for a state college or university and a local community college -- it may no longer be possible to put together something resembling a livable income (not that that was really possible anyway), since they'd be working more than 30 hours total for a single employer -- the state.

Short-term, the pain for people who have been (semi-) supporting themselves through adjunct work is going to be very real, and there may also be pain for those in charge of hiring adjuncts to teach sections assigned to "professor staff," and, eventually, for students who need to take the intro classes most often taught by adjuncts.  Longer-term, I wonder whether this might constitute some sort of tipping point which makes somebody (parents? students? legislators?  TT faculty? at least some administrators? adjuncts themselves?) realize we just can't go on this way.

But I'm probably being overly optimistic. I'd love to see a re-commitment of money and other resources to teaching introductory classes in ways that truly engage (and challenge) students, especially having those classes taught in small sections led by instructors with full-time salaries and benefits and review systems that don't rely solely on student evaluations, and sufficient time to work with each other to assess and update the curriculum and course materials (otherwise known as faculty governance/control of the curriculum, one of those historic values of American higher ed that seems to be getting lost).

However, judging from discussions both at my own school and on the internet, I'd guess that the preferred solution will be more introductory courses taught through large lectures delivered by a Ph.D.-holding (and decently compensated) instructor of record, with work graded, if not by a machine, then by poorly-compensated TAs and/or a new breed of adjuncts who are even more interchangeable, and hence more vulnerable (I'm not sure Jonathan Rees is correct in seeing online methods of instruction as the key threat, but he's right that the potential restructuring of higher ed employment to include a few highly-compensated superprofessors and many, many assembly-line workers is a real, and alarming, possibility).

And, as I think we're all increasingly coming to realize, when the majority of the faculty (76% of faculty appointments are non-TT, and most of those are part-time, according to the AAUP)  are vulnerable, we're all vulnerable.