Some Thoughts While Watching the Graduates March Across the Stage in Front of Me. 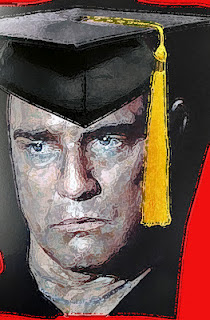 I didn’t know they made heels that high! If she slips her ankle will snap like a dry tree branch.

That student doesn’t have many people here cheering her, I’d better clap a bit louder so it’s not too quiet when she crosses the stage.

Does the announcer practice pronouncing those names? Oh wait, That’s how you pronounce it? Crap, I said it wrong every time I took attendance!

I am going to miss this student. They were a real joy to have in class.

Hoo-boy, I am so not going to miss this next student. You’re some future boss’s nightmare.

I’m glad I sprung for a tam. I never could keep that damn mortarboard on.


Is that a Nook that professor has? I guess you can get away with reading if you’re sitting in the middle of a middle row.

A young woman does a cartwheel across the stage. OK, I confess, I thought it was fun. She’s so happy.

Loud cheers for the older woman who went back to school after her kids were grown. Both the students and the faculty liked her. She was kind of a house mom to some of the students. For some of the younger faculty too I suspect. I kind of liked having a student my age who understood my Beatles references.

Another student I am going to miss. Sigh.

Jeeze, did that student bring her entire hometown? When she walked across the stage one entire section of the auditorium erupted.

Family members are holding up signs in at least three or four different languages. But the pride in their eyes is the same.

My robe is kind of plain. Oh well. It’s not like I’m at Oxbridge.

Going into the liquor store in full regalia and the clerk doesn’t bat an eye. College town.

That’s the first time I’ve ever seen that student not hung-over. Oh wait, never mind, he is.

That’s the first time I’ve ever seen that student not stoned. Oh wait.

Yep, he wore those cowboy boots under his gown. Why not? He wore them to class every day.

Damn, that wasn’t a bad commencement address. Not too long, appropriate humor, some good advice that wasn’t too clichéd. When I got my BA the speaker was some politician who gave his standard stump speech. I rather enjoyed when he was forced to resign a few months later after getting caught taking bribes.

I haven’t seen a single pair of flip-flops go past! I didn’t know some of my students owned any shoes that were not beach-wear.

Ah, another student I’ll miss, and another I won’t.

The prof next to me gave up and is holding his mortarboard in his lap.

The little waves some of the students give their professors are sweet.

There are at least four games of Angry Birds going on in the back rows up here. Probably more among the students.

OK, here comes that other school. I never had any of these students. Time to zone out and clap politely.

There’s that trustee that thinks we’re paid too much and wants to replace us with adjuncts. Yeah, yeah, you made a million bucks selling car parts. You still know as much about running a university as a fish knows about forging steel.

My feet are killing me. Damn new dress shoes. I'm going to limp down the aisle.

All done. I’ll go wish a few students good luck and try to look erudite in front of their parents. It feels much different than when I was the student. The mixture of hope and uncertainty is gone, but there is still that blend of happiness and sadness. I did my best. Off you go. I’m heading out to spend time with my family, my dogs, my garden, and my writing.